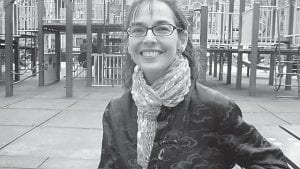 Columnist Lenore Skenazy has been a frequent guest on national television talking about her views on letting children have some independence.

Maybe you saw me on “Good Morning America” this week. Or “Anderson Cooper Live.” Or Fox TV. Or being talked about on “The View.” All because I said that kids should have at least one afternoon a week when they play at the park on their own.

Except I didn’t exactly put it that way. What I said was: I am offering an eight-week, $350 class in Central Park, called “I Won’t Supervise Your Kids.”

For $350, what you get is my saying hi to the kids, ages 8 to 18, and then heading off to the coffee shop with my cellphone. If they really need me, they can call me. But if they’re just bored, well, they have to figure out something to do. And if they disagree about what that something is, well, they have to work it out on their own. And if they decide to play a game and one kid says the ball was out of bounds and one says oh, no, it wasn’t, guess who’s not getting involved?

In other words: For $350, kids finally get “tutored,” if you will, in all the skills of childhood — communication, compromise, leadership, problem-solving — which just happen to be all the skills of adulthood.

“Play looks like a waste of time because it’s not ‘goal-directed’ and parents are,” says Hara Marano, author of the book “A Nation of Wimps.” But in fact, “play builds brains.” It’s nature’s super-vitamin because it builds bodies, too. A recent study found that kids actually get more exercise when they’re playing unsupervised. The same study also found they “enjoy a richer social life than those who are constantly supervised.”

So, yes, it’s a wild idea to charge for free time. It’s wacky! But that wackiness helped garner the kind of media attention normally reserved for princes prancing naked in Vegas. And that’s good, because the pricey price tag called attention to a timeless truth: We pay good money to enrich our kids with after-school soccer and Mandarin and Kumon and piano lessons. Maybe we don’t value free play simply because — it’s free.

Of course, it was not just the price tag that gave folks pause. The other huge objection was to the idea that kids can ever be safe, even for a little while, on their own. Here are just a few of the 3,000-plus comments on the “Good Morning America” piece about my class:

“There are many dead kids today who died horrible deaths whose parents thought it would never happen to.”

“Might as well pay $350 to let Jerry Sandusky watch your kids.”

What was encouraging to me, however, was the fact that these comments were counterbalanced by folks writing things such as, “The media has convinced the American public that there’s a predator behind every tree and around every corner. Truth is, most of the crimes against children are committed by family members or acquaintances.”

“What?? Let kids play like I did when I was a kid? What a horrible idea! Next thing you know, they’d get cuts and get dirty and develop actual character and not be a bunch of wimps.”

I don’t think I’ll be making a lot of money (OK, any) on this. In fact, only four kids showed up to the first class, and two of them were the children of my friends. One was my son. Full scholarships all around! But one was the son of an onlooker who heard me out and started remembering the days when he was a kid playing outside all day, “making up games” and solving his own fights.

He looked at his 8-year-old son and seemed to be thinking, “Maybe it’s time to give him the same thing.”