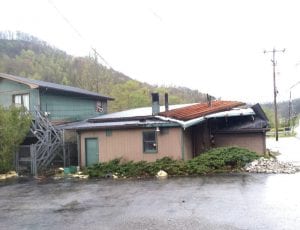 THE ROOF WAS RIPPED off Croucher’s Service Center at Isom by high winds Sunday night.

With the COVID-19 pandemic that has infected more than a half-million people in the United States alone, schools closed and all of Kentucky under a stay-at-home advisory, it’s hard to imagine a worse time for the electricity to be out.

Add to that the fact that many people began receiving federal stimulus payments the day before the storm, and businesses where there was still power were swarmed by people on Monday. Restaurants, which are only open for drive-thru, curbside pickup and delivery, were kept busy all day, as were building supply and hardware stores. Many people had to cut up downed trees to get out.

Kentucky River District Health Director Scott Lockard said eastern Kentucky “had been doing great” at slowing down the spread of the coronavirus virus through social distancing strategies, and health officials are hoping people remembered to take some precautions while out because of the storm.

“Obviously, we have great concerns about mass gatherings, and where everybody was out, we hope people tried to maintain social distance as much as they could while they were out trying to help neighbors,” Lockard said.

In Whitesburg, lines at drive-thru windows of restaurants stretched out onto the highway, and people were reportedly traveling to Hazard and to Wise, Va., to buy generators in an effort to save frozen food collected for weeks of quarantine. Electricity was still on at the old Sugar Shack Double Kwik on Hazard Road, but the next station with power was more than 20 miles away at Jeff in Perry County. Cars lined up to fill up at Sugar Shack and Food City Gas-n-Go in Whitesburg.

Lockard said given the long incubation time for COVID-19, it will take about two weeks to fully assess the effect the crowds had on the epidemic.

“We’ll just have to wait and see,” Lockard said.