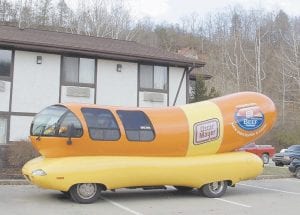 The Oscar Mayer Wienermobile can be seen on the parking lot of the Super 8 motel in West Whitesburg this week. The “hot dog on wheels” will participate in the Whitesburg Christmas parade on Friday at 5 p.m. Children can see the Wienermobile and win Wienerwhistles at Christmas in the Park at Riverside Park in Whitesburg after the parade. The vehicle will be on display at the Whitesburg Wal-Mart from 9 a.m. until 1 p.m. on December 11.

A wish made by the Letcher County Kids Day Committee is being granted by a popular hotdog maker.

“We decided two years ago that one of the cool things that our kids would never get to see is the Oscar Mayer Wienermobile,” said Steve Brewer, a member of the Kids Day committee.

The Wienermobile, which is built on a Chevrolet W4 Series chassis, can be seen in Friday night’s Christmas parade in downtown Whitesburg, which starts at 5 p.m.

“Everyone always points and waves when we are in parades,” said John Woodbridge, a Hotdogger (Wienermobile driver) from Harrisburg, Pa. “It’s like bringing an American icon to town.”

Sammi Park, a Hotdogger from Washington, Mo., said Kraft Foods receives about 10,000 requests a year for the mobile to attend events. Because there are only six Wienermobiles and 14 Hotdoggers, only about 1,000 requests can be honored each year. Park said she and Woodbridge travel an average of 500 miles a week.

“It’s an awesome compliment to get requests,” said Woodbridge.

The Wienermobile, a 13-footlong “hot dog on wheels,” was created in 1936 by Oscar Mayer’s nephew, Karl G. Mayer, as a way to promote the family’s products in Chicago.

The Wienermobile will at Wal-Mart in Whitesburg tomorrow (Thursday) between the hours of 9 a.m. and 1 p.m. On the next day, children can win one-of-a-kind “Wienerwhistles” (replicas of the car) at Christmas in the Park, which begins at 6 p.m. on December 12 at the Riverside Park in Whitesburg.

Other attractions to be at Christmas in the Park are a nativity scene, a Christmas train, pictures with Santa, an elf slide inflatable, carriage rides, and crafts. Free food and drinks will be served.

After Park and Woodbridge leave Letcher County on Saturday morning the Wienermobile will be stopping at Wal-Mart stores in Lexington.

Lt. Gov. Daniel Mongiardo will serve as grand marshal in the parade.