Must serve 20 years before parole chance 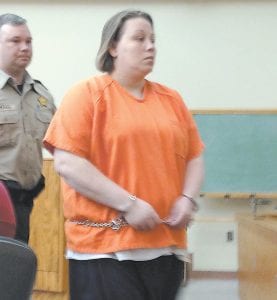 ADMITS TO HUSBAND’S MURDER — Stephanie Fleming, 32, was escorted out of the Letcher Circuit Courtroom Monday by Letcher County Deputy Sheriff Jason Boggs. Fleming, 32, pleaded guilty to helping her lover, James Maggard, plan and carry out the brutal slaying of Dradrick “Drad” Fleming , her husband and father of her two young children.

In pleading guilty earlier this week to her role in the brutal slaying of her husband in June 2012, a Millstone woman will avoid the possibility of being sentenced to death, or to life in prison without the possibility of parole, if she follows through on her promise to testify against her lover and another friend who are also charged in the case.

Stephanie Yvonne Jones Fleming, 32, must give a recorded sworn statement regarding the murder of Dradrick “Drad” Fleming, a 34-yearold father of three, and testify in the separate trials set against her lover, 34-year-old James Ray Maggard of Neon, and the third suspect, 26-year-old Austin L. Ison of Pert Creek near Whitesburg.

Letcher Commonwealth’s Attorney Edison G. Banks II said he consulted with Mr. Fleming’s family and the Letcher County Sheriff ’s Department before an offer was extended to Mrs. Fleming for a life sentence that would leave her eligible to be considered for parole in about 18 years.

“Our quest has always been to uncover the truth and to obtain justice for the murder of Drad Fleming and to see that those responsible for his murder are held accountable,” said Banks. “We have made a tremendous stride in achieving that goal by virtue of the guilty plea of Stephanie Jones Fleming. And with her testimony and other evidence, we believe we will soon achieve that goal and bring all responsible to justice.”

By pleading guilty, Mrs. Fleming agrees with the case description included in the Commonwealth’s offer that states James Maggard beat Drad Fleming on June 20, 2012 with a bat outside the Flemings’ home at Millstone and then placed Mr. Fleming in his own pickup truck which later burned near Franks Creek at Eolia.

Mrs. Fleming admits in the agreement that she was present when the beating took place and that she did nothing to assist her husband, helping Maggard instead to clean up evidence of the beating.

The agreement also says that Mrs. Fleming knowingly “allowed” Maggard to take the pickup truck carrying her badly beaten husband to a site on Black Mountain, where Maggard set the truck on fire and caused the death of Mr. Fleming.

The agreement states that Mrs. Fleming “ was aware of Jame Maggard’s and Austin Ison’s plan to kill her husband” before the crime was committed.

“ The facts she admitted to doing are consistent with our investigation and we believe that justice will ultimately be served,” said Letcher County Sheriff Danny Webb.

If Letcher Circuit Judge Sam Wright approves the plea agreement during Mrs. Fleming’s formal sentencing set for April 16, the mother of two will serve life terms on each of the charges of complicity to capital murder, complicit to arson and complicity to kidnapping. She would also receive five-years prison terms for complicity to tampering with physical evidence and hindering prosecution. The sentences will run concurrently (at the same time).

Although Banks said Mrs. Fleming might get a chance to apply for release on parole after serving a total of 20 years in prison, including the time she has served while awaiting trial, he believes it is highly unlikely that she would ever be granted release parole after appearing at a hearing before the state parole board.

“The family can object and oppose it every step of the way,” said Banks. “The odds are in our favor that she will serve her sentence.”

Maggard is still eligible to be sentenced to death if he is tried and found guilty of capital murder by a jury. Ison’s trial, which is not a death penalty case, is scheduled to begin on April 28 in Letcher Circuit Court.

“It has always been important for the family to know exactly how Drad was murdered,” said Banks.

Investigators have maintained that Mrs. Fleming and Maggard began conspiring to murder Drad Fleming after they became lovers while working at Mc- Donald’s in Whitesburg. Sources knowledgeable with investigation have said that Mrs. Fleming masterminded the plan and convinced her husband to increase the amount of his life insurance policy about a month before the murder.

The plea agreement says Mrs. Fleming will “provide a sworn statement to the Commonwealth prior to her sentencing” that will define “the roles played by all parties involved.”

Authorities have said that Ison, a former mortuary student, was not present at the beating and murder, but assisted Mrs. Fleming and Maggard in planning the crime and told the lovers how hot a fire would have to be in order to disintegrate the body of Mr. Fleming.

Mrs. Fleming and Maggard were charged in the case on the afternoon of June 23, 2012, after Maggard walked into the sheriff ’s offi ce and admitted to his role in the slaying before leading deputies to the crime scene on Black Mountain.

Drad Fleming went missing on the night of June 20, 2012, sometime after he was last seen looking for a place to park in Neon so he could attend visitation for an uncle who had been killed in an ATV accident. Authorities have said Mr. Fleming, a roof-bolting machine operator for Cumberland River Coal Co., left before attending the wake after being lured by Mrs. Fleming back to the couple’s trailer so that Maggard could ambush him with the baseball bat.

Video surveillance taken from a coal mine near Little Fork of Franks Creek shows Fleming’s truck driving by the mine site at a high rate of speed at 10:15 p.m. on the night of the murder. The recording also shows Maggard walking back down the same road one hour and 37 minutes later.

Maggard’s cousin, who works at a nearby mine site, told police that Mrs. Fleming showed up a short time later and brought cleaning supplies and clean clothes to Maggard, who then washed and changed into the clothes in a guard shack before he and Mrs. Fleming left Black Mountain together. An autopsy performed the day after the remains of Mr. Fleming were recovered revealed that he died of “smoke inhalation and thermal injuries.” The report said that Mr. Fleming’s lungs, larynx and trachea contained “abundant amounts of soot.”

Mrs. Fleming was represented in court this week by public defenders Bridget Hofler, of Frankfort, Julia Mudd of Frankfort, and Traci Hancock of Pikeville.