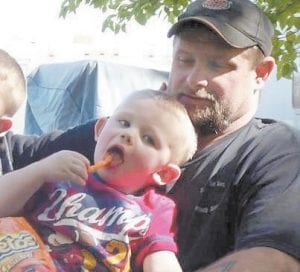 Murder victim Dradrick Fleming is seen playing with his young sons in this undated photo. “He loved his kids,” said his brother, Afton Fleming.

Dradrick Fleming will no longer be able to dote on his two young sons or go hunting or fishing or riding four-wheelers through the hills — all things he liked to do when he wasn’t at work operating a roofbolting machine in an underground coal mine.

Every simple pleasure Fleming enjoyed was taken from him last week when he was brutally murdered. Authorities still aren’t sure whether Fleming, 34, was already dead or still alive after he was beaten with a wooden bat and placed inside his new red Chevrolet pickup and then set afire. They do know, however, that Fleming’s body was burned beyond recognition after someone doused his truck with an “accelerant” and pushed it over an embankment in the Black Mountain area of Letcher County.

Who would commit such a terrible crime? The Letcher County Sheriff ’s Department has charged Fleming’s wife, 30-year-old Stephanie Yvonn Jones Fleming, and her 33-year-old lover, James Ray Maggard, with murder, and hindering prosecution in connection with the case. Maggard is also charged with first-degree arson, while Stephanie Fleming faces additional charges of being a persistent felony offender (first and second degrees). 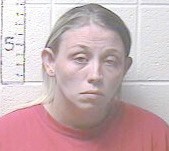 Fleming’s wife, Stephanie (below) and her lover, James Ray Maggard (left) are charged with murder and are being held in the Letcher County Jail without bond.

Maggard and Mrs. Fleming, who met while working at McDonald’s in Whitesburg, both pleaded not guilty Tuesday afternoon during an arraignment in Letcher District Court. Both suspects are scheduled to return to district court at 3 p.m. Thursday for a preliminary hearing. They continue to be held without bond in the Letcher County Jail.

According to arrest citations, Maggard and Mrs. Fleming conspired to murder Dradrick Fleming on June 22 “by beating him to death or near death and then placing (his) body inside of his pickup truck and driving the truck and body to Black Mountain where the vehicle and Mr. Fleming’s body were covered with an accelerant and then set on fire.” The citations charge that Maggard and Mrs. Fleming also schemed to cash a paycheck issued to Dradrick Fleming while misleading police about the whereabouts of Mr. Fleming, who had been reported missing. 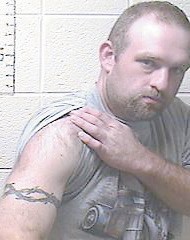 Dradrick Fleming had worked as a roof bolter for Cumberland River Coal Company at a mine at Franks Creek at Eolia for about 10 years, his brother, Afton Fleming, told The Mountain Eagle. He was the father to 17-year-old daughter Selena from a previous marriage and had two sons with Stephanie Fleming, Cadence, 3, and Tallon, 2.

Afton Fleming said the last time he saw his brother alive was between 9:30 and 10 p.m. last Wednesday (June 20) while Dradrick was looking for a place to park outside the Neon Church of Christ, where visitation was being held for their uncle, Larry Chandis “Chan” Fleming, a disabled coal miner who was killed in an all-terrain vehicle accident on June 17.

“We love him,” said Afton Fleming. “I’d do anything to get him back.” 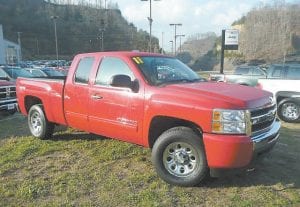 Dradrick Fleming’s 2011 Chevrolet pickup, shown on the lot before he took delivery, was found pushed over a hill at Franks Creek at Eolia. Fleming’s badly burned body was found inside the truck, which police say was intentionally set on fire.

Dradrick and Stephanie Fleming were separated for a while earlier this year, but at the time of Mr. Fleming’s disappearance were living with their two sons in a mobile home in the community of Apex, between Thornton and Millstone.

Damron said that after searching for Mr. Fleming “in and around the areas we thought would be pertinent” on Thursday, he and other deputies met with members of Fleming’s family in the offices of the Pine Mountain Search and Rescue Team on Friday to talk about where Fleming might be.

Stephanie Fleming eventually told authorities she had gotten a call from her husband saying he was driving to a meet a person on Pine Mountain when she last heard from him. Family members and deputies continued their ground search on Saturday while Damron secured the services of a Jenkins-based Wings Air Rescue helicopter to fly him around the area looking for Mr. Fleming’s 2011 truck.

While Damron was still in the helicopter, James Maggard walked into the sheriff ’s office in Whitesburg and confessed to killing Mr. Fleming, Damron said, adding that Maggard then rode in a car with two deputies to show them where the truck had come to rest down an embankment along Franks Creek Road in Eolia near KY 806.

Because Dradrick Fleming’s body was burned so badly, state medical examiners in Frankfort were still performing tests on Tuesday to confirm Mr. Fleming’s identity and the exact cause of his death. In addition to the medical examiner’s office, the sheriff ’s department is working with an arson investigator assigned to the case by Kentucky State Police.

Damron declined to speculate on a motive for the murder or to reveal any of what Maggard, whose address is listed as 410 Goose Creek Road in Neon, told police while making his confession.

A source close to the investigation told The Mountain Eagle that Maggard claimed that he was out walking when Mr. Fleming approached him and tried to beat him with the wooden bat. The source, who asked not to be identified, said Maggard told authorities he was able to take the bat away from Fleming, knocked him unconscious in self-defense and left him in his truck, which would have had to cross a five-foot berm before it rolled down the hill.

According to the source, Stephanie Fleming showed little interest in trying to find her husband while police and family members were searching for him. The source said Mrs. Fleming has denied any involvement in her husband’s murder and told police that Maggard told her that Dradrick Fleming “won’t be able to bother me anymore.”

Letcher County Sheriff Danny Webb declined to comment on the specifics of the investigation, but did say that statements made by Mrs. Fleming and Maggard were “unbelievable.”

Records in the Letcher Circuit Clerk’s Office show that Stephanie Fleming was arrested on May 21 and charged with fourth-degree assault (domestic violence) after she allegedly punched Dradrick Fleming’s mother, Kathy C. Bentley of Millstone, in the mouth, causing Bentley’s lip to swell and burst.

After pleading guilty to those charges on Nov. 11, 2011, Mrs. Fleming was sentenced to pretrial diversion for three years with the requirement she remain drug- and alcohol-free and allow the Department of Probation and Parole to conduct home visits. The agreement also said that if she committed another offense during the three–year period she could be sentenced to six years in prison.