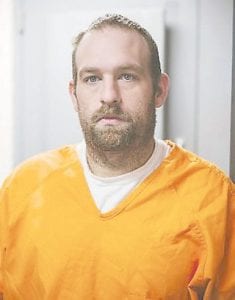 An admission contained in a confession to police appears to have played a major role in the Letcher County Grand Jury’s decision to indict a Letcher County woman and her lover on charges that could place them on Kentucky’s Death Row if they are convicted of the crimes of which they are charged.

The grand jury handed up indictments to Letcher Circuit Judge Sam Wright last week charging Stephanie Yvonne Jones Fleming and James Ray Maggard with complicity to capital murder and up to six other counts in the death of Mrs. Fleming’s husband, Dradwick “Drad” Fleming late on June 20 or early June 21.

The grand jury charges that Maggard, 33, of 410 Goose Creek Road, Neon, beat Drad Fleming and placed his semi-conscious body in Fleming’s pickup truck, which Maggard then set on fire.

The indictments, which were returned July 26 and signed by grand jury foreperson Tina Sparkman, were accompanied by a “notice of aggravating circumstances” in which Letcher Commonwealth’s Attorney Edison G. Banks II lists two reasons why he will seek the death penalty against Mrs. Fleming and Maggard.

“Said aggravating circumstances include the following,” wrote Banks in the notices. “1. The offense of murder or kidnapping was committed while the offender was engaged in the commission of arson in the first degree. 2. The offender committed the offense of murder for (himself/herself ) or another, for the purpose of receiving money or any other thing of monetary value, or for other profit.”

Drad Fleming’s badly burned body was found in his red 2011 Chevrolet Silverado pickup on the afternoon of June 23 after Maggard walked into the Letcher County Sheriff ’s Office and confessed to killing Fleming. Maggard then led police to the site of Fleming’s body near a mine site on Black Mountain near Eolia.

Maggard told deputies he beat Fleming, who worked as an underground coal miner, with a baseball bat, and said the incident occurred on Pine Mountain near Whitesburg after Fleming confronted him with the bat. Investigators say the beating was an ambush which took place near the Flemings’ mobile home near Millstone around 10 p.m. on June 20, and that Maggard then drove a still-alive Fleming to the mine site near Franks Creek before pouring an accelerant on Fleming and the truck and setting them both afire.

Video surveillance taken from a coal mine near Little Fork of Franks Creek shows Fleming’s truck driving by the mine site at a high rate of speed at 10:15 p.m. on June 20. The same recording shows Fleming walking back down the same road one hour and 37 minutes later. Maggard’s cousin who works at a nearby mine site told police that Mrs. Fleming, who began an affair with Maggard while the two worked at McDonald’s in Whitesburg, showed up a short time later and brought cleaning supplies and clean clothes to Maggard, who then washed and changed into the clothes in a guard shack.

Police still haven’t found the bat used in the assault on Drad Fleming or the bag containing the clothes James Maggard was wearing.

The six- count indictment against Maggard says he committed the offense of murder by beating Drad Fleming “and placing his semi-conscious body inside of Mr. Fleming’s pick-up truck (which he) then set on fire and thereby caused the death of Drad Fleming.”

The indictment says Maggard committed the crime of firstdegree arson when he “started a fire or caused an explosion (in the) pick-up truck occupied by Drad Fleming.”

Maggard committed the crime of kidnapping, the jury said, “when he unlawfully restrained Drad Fleming (while attempting) to accomplish or to advance the commission of a felony, or to inflict bodily injury or to terrorize Mr. Fleming with Mr. Fleming not being released alive from said kidnapping.”

Maggard confessed to police that Drad Fleming appeared to be regaining consciousness while Maggard was driving Fleming to the location where his body was later found. An informant who was in a Letcher County Jail cell with Maggard after his arrest told police that Maggard told him he knew Mr. Fleming was still alive when the truck was set on fire because “he could hear Mr. Fleming screaming” when the truck plunged over the hill in flames.

Mrs. Fleming is charged with being complicit with Maggard in all of the crimes, as well as “being a persistent felony offender in the second-degree by currently being more than 21 years of age and having been previously convicted of a felony when she was 18 years of age or more, and for which she was on probation, parole … or any other form of legal release at the time of the current felony” for which she is charged. Mrs. Fleming was convicted in 2011 of food stamp and welfare fraud.