Wilco returns to past work for new album 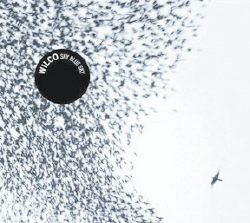 Unlike the critically-acclaimed experimental releases of the last few years – “Yankee Hotel Foxtrot” (2002) and “A Ghost Is Born” (2004) – “Sky Blue Sky” is a mellow return to form. This time around, Wilco have released an album more akin to the band’s earlier works, especially 1996’s “Being There.”

Gone from “Sky Blue Sky” is the synth-laden dissidence, the artistic, hard driven pounding and the spaced out negativity that so often peeked through Wilco’s recent work. This album has it’s moments of moodiness, but it also has guitars – mostly acoustic, some electric, some twang, and some fuzzy – and not just that, lots of guitar solos (compliments of new guitarist, former session player Nels Cline).

At times, those guitars hearken toward Grateful Dead-like sensitivity, but at the same time bits of Thin Lizzy, Neil Young, Steely Dan, and Crosby, Stills and Nash pop through. Not that the previous efforts didn’t have guitars, they just had a lot of other stuff vying for attention. The closest competition this time around are some lovely piano and Hammond organ chops.

Lyrically, Tweedy sings in a haunting, sandpaper monotone for much of the album, and the feel is a complete throwback to earlier times, circa 1972. On the opening track, “Either Way,” Tweedy is uncharacteristically optimistic when he sings “Maybe the sun will shine today/The clouds will roll away/Maybe I won’t be so afraid/I will understand everything has its plan”. The line is sung over a simple acoustic guitar, and the beautiful lifting Hammond B3, which musically serves as a hand to ease the listener into this new, optimistic, hauntingly mellow album.

Wilco rose from the ashes of seminal roots rockers Uncle Tupelo, who disbanded in 1994. While Jay Farrar, one of the group’s two singer/songwriters, went on to form the band Son Volt, his ex-partner Jeff Tweedy established Wilco along with the remaining members of Tupelo’s final incarnation. They since have fared well through several line-up changes, label disputes and addictions, all the time being critically successful and prolific.

This album feels like an album by a band whose purpose is to not conform. Every album, however similar to the last, is different. And ultimately, that’s the best way to describe this release … different.

Not only is it mellow and calm, but it feels like an album by a band, not with a band. Sure, Jeff Tweedy is the prominent songwriter, but this time around, he loosens the reigns just enough to allow each member to contribute there own ideas and influences. The results are surprisingly comfortable.