Wild ginseng poachers lured by prices as high as $600 lb. 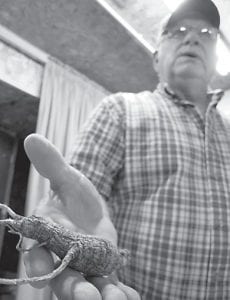 Don Dobbs, owner of Buckhorn Ginseng, holds a wild ginseng root on in Richland Center, Wis. The root can be worth as much as $600 a pound. (AP Photo)

They slink through the woods in camouflage and face paint, armed with tire irons, screwdrivers and hoes, seeking a plant that looks like a cross between a Virginia creeper and poison ivy.

They’re the new breed of ginseng diggers, a rough and tumble lot looking to parlay rising Asian demand for the increasingly rare plant’s roots into a fast buck.

Amid a sluggish economy, police say, more diggers are pushing into the backcountry from the upper Mississippi River to the Appalachian Mountains in search of wild ginseng, eschewing harvest permits, ripping up even the smallest plants and ignoring property lines.

Their slash-and-burn tactics have left property owners enraged and biologists worried about the slow-growing plant’s long-term survival. In Ohio prosecutors charged one landowner with gunning down a man he believed was stealing ginseng.

“We’re not finding big, healthy populations. It was there, and a lot of it has been taken,” said Nora Murdock, an ecologist with the National Park Service who monitors plant populations in four parks across the southeastern U.S. “It’s like taking bricks out of a building. You might not feel the first brick … but sooner or later you’re going to pull out too many.”

Ginseng, a long-stemmed plant with five leaves and distinctive red berries, long has been coveted in many Asian cultures because the plant’s gnarly, multipronged root is believed to have medicinal properties that help improve everything from memory to erectile dysfunction. And the wild roots are believed to be more potent than cultivated roots.

The plant takes years to mature, and it has been harvested to the edge of extinction in China. Ginseng buyers have turned to North America, where the plant can be found from northeastern Canada through the eastern U.S.

Conscious of the harvesting pressure, the Convention of International

Trade of Endangered Species of Wild Fauna and Flora imposed restrictions on exports in 1975. Under those terms, states certify ginseng has been harvested legally and exporters must obtain a federal permit. Most states have restricted ginseng harvest to a few months in the fall and require diggers to obtain permits during that period. It’s illegal to harvest ginseng from any national park and most national forests in the southeast.

The price of wild ginseng roots has climbed in the last decade. Now domestic buyers pay $500 to $600 per pound compared with about $50 per pound of cultivated roots. Law enforcement officials say the prices have pushed people looking for quick money into the woods.

“It’s lucrative to spend a day in the woods and walk out with $500 of ginseng in a bag when you don’t have a job,” said Wisconsin conservation warden Ed McCann. “Every one of these plants is like looking at a $5 or $10 bill.”

Clad at times in camouflage, face masks and face paint to blend in, poachers trod through the underbrush with makeshift tools such as tire irons and screwdrivers looking for ginseng, police said. They don’t have any qualms about digging up immature roots; they want to get at the plants before other poachers or before the state’s harvest season begins. But that ensures the plants won’t reproduce and feeds a cycle of dwindling populations and rising prices.

And poachers know how to get around the conservation regulations. They’ll dig ginseng out of season to get a jump on competitors and take it to dealers when the season opens or purchase permits after the fact. In other cases dealers just look the other way, said John Welke, a Wisconsin conservation warden.

It’s difficult to get a clear picture of the extent of poaching in the U.S. — violation statistics are spread across layers of state and federal jurisdictions, but law enforcement officials and biologists across the eastern half of the country told The Associated Press they believe it’s on the rise.

In Wisconsin, the leading U.S. producer of commercially grown ginseng, wildlife officials say violations such as harvesting wild ginseng without a permit or harvesting out of season tripled from 12 in 2007 to 36 last year.

Ohio wildlife authorities have made 100 arrests between 2008 and last year for various ginseng violations ranging from digging without permission to digging or buying out of season.

A team of West Virginia University researchers counted 30 ginseng populations across New York, Pennsylvania, Maryland, Indiana, Kentucky, Virginia and West Virginia between 1998 and 2009. The team reported that of the 368 plants they discovered had been harvested, only five were taken legally.

“It’s very difficult to catch a poacher,” said U.S. Forest Service botanist Gary Kauffman. “You could put everything in a backpack and your hands are clean, nobody really knows what you’re doing.”

A grand jury in southeastern Ohio charged 78-year-old Joseph Kutter of New Paris with killing a man whom Kutter claimed had trespassed onto his property to poach ginseng.