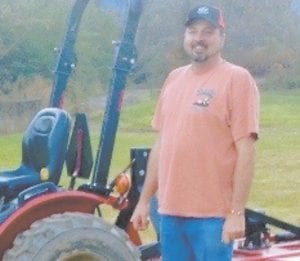 Chris Caudill loves farming at his home at Whitco, near Whitesburg.

For Chris Caudill, it started on a whim.

He just got the urge to expand his garden, see what he could make of it.

He grew up helping his dad in the garden and has grown a garden for his family for several years at his home in Whitco in Letcher County, but it never had occurred to him to expand or make money from it.

“I just got one of those big wild hairs,” he said, with his trademark super-sized grin.

In total, that wild hair led him to buy a huge tractor and plant eight acres this year, including seven acres of pumpkins alone.

He sold 86 dozen ears of corn, netting him about $400 in one day. He showed up with his side-by-side ATV filled completely full of corn that day. He sold nearly all of it in the first 30 minutes.

As for his seven acres of pumpkins?

That gamble was a long shot, with even greater odds due to an unusually rainy summer. He planted about 30,000 pumpkins. The yield was only about 2,000. He experienced about a 90 percent loss, a potential of $34,000 if he had realized full return on his planting.

Still he made more than he spent, and 2,000 pumpkins is nothing to sneeze at for a self-professed hobby farmer. The Letcher County Cooperative Extension service alone bought 1,200 pumpkins from him in one order.

He’ll try pumpkins again next year, and now that he sees how well it sells, he will plant a lot more corn next year.

“Everybody loves corn,” he said, adding that he eats corn raw, straight from the cob. “Everything in the garden is edible raw. When you eat it raw, you can taste the natural sugars and the starches. When you cook it, you lose all the flavor.”

Caudill loves to encourage people around him to try raw vegetables and to try farming.

“I just like doing it. And I wanted to make it easier on myself so I bought the tractor and that made it much easier to grow more.”

He bought that new tractor with all the attachments for about $20,000 and, so far, has made all the payments solely from his garden earnings. He even has the payments paid up until March, when the next growing season will have begun. He used the tractor to make a little money too by tilling and plowing and clearing land for other people.

Farming has always been just a hobby for Caudill, who works as the director of the City of Whitesburg, Water and Sewer Department.

He’d like to see more hobby farmers bring their extra produce down to the Farmers Market. Although he sees most people just grow enough for their families, “everyone has extra of something,” he says.

It turned into fun and socializing for Caudill too. He and the other vendors he met at the market bought from each other and bartered with each other for produce, trading blackberries and blueberries for squash and greens or honey.

He said he mostly saw acceptance from his community and support for what he was doing this summer. However, he has heard people express reluctance to visit the market because they see the market as full of “treehuggers”.

He is already planning for next year as he looks out over his empty fields with a gleam in his eye. He is working on setting up some low tunnels and considering applying for a grant for some high tunnels to extend his growing season. He is also applying for a farm number.

It’s hard to predict what kind of “wild hair” might strike Caudill next year as he plans his garden.

“My neighbors already think I’m crazy,“ he said, laughing. “This doesn’t surprise them.”

. Breaking Beans: The Appalachian Food Story Project is an initiative of Community Farm Alliance to tell the story of how local food and farming in Eastern Kentucky can contribute to a bright future in the mountains. For more on the project and the Alliance, visit cfaky.org.