Wildcat defenders are getting better? 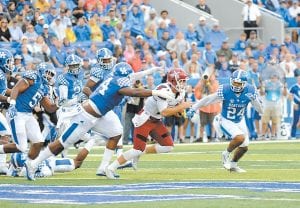 Despite numbers to the contrary, UK linebacker Courtney Love thinks the Kentucky defense is improving despite giving up 42 points and 500 yards to New Mexico State. (Photo by Vicky Graff )

Mark Stoops said he was taking over the Kentucky defense last week and almost everyone thought it could not hurt. Yet with Stoops in charge, UK still gave up 42 points and 500 total yards to New Mexico State in a 62-42 win.

Kentucky hosts South Carolina Saturday night — a game many UK fans want to believe is winnable. But is it?

Yet linebacker Courtney Love says the defense is getting better. When I asked him how I could explain that to fans who looked at the numbers, he gave me this answer for you after last week’s win.

“We are getting better because you see guys making plays. You see guys getting to the ball. You see guys willing to fight the second half. It kind of looked like Southern Miss a little bit when they scored right before the half and they got momentum,” Love said. “We came out and got a stop and then another stop. Guys were just finishing and getting to the ball. You can see guys getting better and we will continue to do that. We just have to be more consistent. That’s all I can tell fans.”

After spending 44 years coaching basketball at every level, Lin Dunn retired in the summer of 2014 to become a full-time consultant for different college basketball teams.

It was a life she enjoyed. She set her own hours, picked where she wanted to work — or not work.

“It was a great situation but I was still connected to the game, too,” she said.

Last season Kentucky women’s coach Matthew Mitchell reached out to her for help. She came to Lexington without even negotiating a fee like she normally does because she had known Mitchell since he was a graduate assistant at Tennessee under Pat Summitt, Dunn’s long-time friend.

“When I came on campus I immediately got invested back with helping him. I liked the people here, really liked the players and liked what he was trying to do. I really enjoyed it but didn’t think about doing it again this year,” Dunn laughed and said.

But yet she’s now a full-time assistant coach after not being able to say no to Mitchell, who lost his entire coaching staff when last season ended.

“The more I thought about what a great way for me to find out what it is really like now, the more I liked Matthew’s offer. It has been 20 years since I have been on a college campus. The recruiting, coaching, schedule. Just get reeducated. And it’s hard for me to say no to Matthew when he says I can help him and his program and I thought, ‘Well maybe I can,’” she said.

“We had to talk about how it would be. But once I made up my mind to do it, I kind of got excited. Back with younger student-athletes … in the pros, when you are working with 30- to 35-year-old athletes, you have a different impact on them than you do with 18, 19, 20 year olds. I enjoyed working with the younger group again.”

That not only includes the players but also assistant coaches Kyra Elzy and Nija Butts, who both played for Summitt and had worked with Mitchell at UK before rejoining his staff.

“I have tremendous respect because they have Tennessee ties. We all in some way are connected to Pat Summit,” Dunn said. “She and I were sorority sisters. We both went to UT-Martin. There was a connection there that was interesting.

“I knew I would look forward not only to working for Matthew, but working with Kyra and Nija. It just looked like a really good situation for me, so I did it. I haven’t regretted a minute of it. Pat always thought of Matthew as a son. She always took care of him and checked on him. She would have patted me on back for helping him through adversity if she was still with us.”

“I never saw turmoil, just turn- over. When all three of your assistants are gone and some of your players transfer, there has been turnover. But at the same time you still won 25 games and still maximized a lot of potential you have,” Dunn said. “Matthew is consistently successful year after year. In some ways he probably thought that I could help bring some stability with the staff and getting players stabilized and then figure out how to be champions.

So did Mitchell get a bad knock for all that happened after the season ended?

“Any time you have the turnover he’s had over the last few seasons, people are going to wonder what is going on and what happened. I don’t think it has helped him to have turnover. I think everybody is looking for stability. I am sure there were questions,” Dunn said.

“But I loved that Matthew stepped up and took responsibility.

I don’t know of very many coaches in any sport that would hold a 45-minute press conference like he did and entertain any question you had about the turnover or program. This is my program. Let’s talk about it. I hold myself accountable. We have to get things back on track. I thought what he did was fantastic and and that is what needed to be done.

Former UK basketball standout Charles Hurt passed away last week at age 55 after a long battle with leukemia. He was a high school Parade All-American at Shelby County and led Shelby to a state title. The 6-6 Hurt played in 124 games at UK from 1979-83. He scored 786 points, grabbed 496 rebounds, gave out 104 assists and made 74 steals. He was a 59.3 percent career shooter and seldom took bad shots.

“I remember when I got to Kentucky as a freshman the way that both Charles Hurt and Derrick Hord just threw me around in practice,” former UK All-American Kenny Walker said. “Charles was so strong. He could just throw me anywhere he wanted.

“But what a great guy he was. Anything I needed to know, he told me and would help me. He was the nicest guy you could want to be around and just a great teammate.”

Hurt enlisted in the U.S. Army in 1987 and became a career military man. He lived in Germany, Kuwait and Korea during his tour and became an information systems chief.