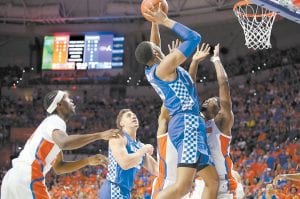 ESPN analyst Jimmy Dykes thinks there are seven teams that can win the national championship, and Kentucky is now one of them.

He has Duke, Virginia, Tennessee, Michigan, Michigan State and Gonzaga on his list along with the Wildcats.

“I really think the national champion will come from those seven teams,” Dykes, a former UK assistant coach, said. “If PJ (Washington) keeps playing the way he has been, Kentucky could find itself in the Final Four and I didn’t think in December I would say that. Kentucky is playing as well as anybody right now.”

Washington had three straight games with 20 or more points snapped in UK’s win at Florida when he had 15 points and 12 rebounds, but that was his third straight double-double — the first time a UK player has done that since Julius Randle in 2014.

“I like this team better than last year’s team, I love the depth factor and the versatility. No reason Kentucky can’t be a Final Four team,” Vitale said.

It’s basically the same thing Vanderbilt coach Bryce Drew said after the Cats had his team down 30 points at halftime last week and held Vandy to 15 points in the first half. The week before it was coaches Ben Howland of Mississippi State and Bill Self of Kansas putting UK in that elite category.

“If Kentucky plays defense like it has been and knocks down 3’s, it can win a national championship,” ESPN analyst Jay Williams said.

Kentucky coach John Calipari believes five to seven teams have “separated” themselves from others, but are not unbeatable as Kentucky almost found out before rallying from an 11-point deficit in the second half at Florida Saturday to win.

“You never know in this thing. If you have a streaky kind of shooting team — my first year in 2010 that’s what we had then we go 0-for-16 from the 3-point line in a game (against West Virginia) and we lose (in the Elite Eight),” Calipari said.

That was the UK team that had John Wall, DeMarcus Cousins, Patrick Patterson and Eric Bledsoe — all still playing in the NBA.

This is John Calipari’s 10th year coaching at Kentucky since he started coaching college basketball 30 years ago at Massachusetts (he had a four-year break from college coaching when he was head coach of the New Jersey Nets in the NBA).

He insists it is not hard for him to relate to players today who are much younger than him.

“Hopefully these kids feel that we’re about them. This is about their success collectively and individually. We try not to leave anybody behind. We’re coaching every kid like they’re a starter.”

Calipari noted that he has “mellowed” over the years and former players often tell him that. He’s not sure if he has or not.

“You get comfortable with a team and you don’t have to be as aggressive. And comfortable means no one’s trying to trick anybody. No one’s trying to get over (someone). They’re not in the gym but they want to blame or create cliques. We don’t have that stuff,” Calipari said. “The stuff we have is a bunch of good kids and I’m having a good time with them.”

She’s a preseason all-Southeastern Conference selection again and one of the leaders on a team that hopes to get past the Super Regional and make the World Series. But as good as Kentucky senior shortstop Katie Reed is on the field, she might be even better off the field.

She’s never made a Bat UK. She has a perfect 4.0 grade-point average to go along with a .340 career batting average and almost .970 fielding average.

Reed was the 2018 SEC Scholar- Athlete of the Year and an Academic All-American. She’s already been accepted into the University of Pittsburgh’s dental school.

“I just have a perfectionist personality. I have always been like that,” said Reed. “My parents put a big focus on academics. Going to college the ultimate goal is to get your degree. Being able to play Division I softball is a plus, but academics has always been first for me. We have the resources, tutors, advisors to help with anything you need here.

“I do have to study a lot. It doesn’t come naturally. I push myself really hard in the classroom. I strive for an A in every class but the important thing is learning and gaining the knowledge in every class. Making A’s meant a little more to me because I knew I would be applying for dental school and it is so competitive to get in. I just like learning, going to class and enjoying school.”

Then she laughed, paused and added, “I do like making A’s, too. I guess I am a little competitive on that, too.”

Reed already has 187 career hits, including 25 doubles and 12 home runs, going into the season that starts Friday in Houston. She’s driven in 75 runs and scored 105 runs but she’s probably even better known for her defensive prowess. She was named to the all- SEC defensive team last year and makes plays most athletes cannot.

She’s known for a “long time” that she wanted to go into the medical field when her softball career ended. Her sophomore year at UK she “shadowed” former UK pitcher Rachel Riley, who was working in a private dental practice in Lexington. She also shadowed a dentist when she went home to St. Louis that summer.

“It just felt like the perfect fit for me and my personality,” Reed said.

Same with the mission trip she took to Ethiopia with Schaper and other UK student-athletes last summer. Coach Rachel Lawson nominated Reed and Schapper for selection.

“It’s incredible that our athletics department can do something like that and take student-athletes there who probably would never experience anything like that otherwise. I am just thankful I got to be part of that amazing experience,” Reed said. “We helped out with different ministries, visited orphanages. Everyone there was so happy and it changed my perspective on life. It has made me appreciative of all we have because they don’t have the same luxuries in other countries that we do. They are just happy for what they have and here we lose track of that sometimes. It was very eye-opening, very heartwarming.”

It’s almost been the same way playing for Lawson following her brilliant prep career in St. Louis. Reed says it has been a “fun experience” even when Lawson has been demanding.

“It has all be worth it. She has helped me grow a lot as a person and player. She pushes you to the limit but wants the best for you,” Reed said. “She will do anything to help me with softball or life in general. The whole staff has been like that.

“It’s also been a great experience to get to a game hours early and fans are already in the stadium. It’s cool having BBN behind us and getting to play in the SEC is just really special. Not a lot of players get to play in the SEC, so I try to embrace it every day. Coach Lawson has helped me understand about living the moment, making the most of every day.”

Chloe Abbott was a three-time first team All-American sprinter when she transferred from Purdue to Kentucky after coach Lonnie Green, who recruited her at Purdue, left to become the coach at Kentucky last summer.

She’s a 400-meter dash specialist but Abbott is also a theater major/vocal performance minor who made a huge impression last month when she sang the national anthem before the Kentucky-Texas A&M basketball game in Rupp Arena. She had to audition to get the invitation to sing and then get permission from Green to miss practice so she could sing.

“Coach was all for it,” Abbott said. “When I first heard about it, I thought, ‘How many people get a chance to do something like this? I don’t have a lot of time on my own to travel and audition because of track. Being able to perform in front of more than 20,000 people on a Tuesday night while still doing track was like the perfect storm. I jumped at the chance and was lucky enough to get picked. Now I hope I get to do it again.”

Based on the reception she got in Rupp Arena, that certainly would suit Kentucky fans.

“The fan reaction was fun. It gave me validation that I was able to do well. I was glad I could perform in a way that the audience appreciated,” Abbott, who is from Detroit, said. “I know a lot of people think some singers are cocky and bigheaded. It was nice to know what I did was appreciated.”

She got to sing the national anthem before a Purdue basketball game before her transfer in front of about 14,000. However, she said that was “way scarier” than singing in front of more people at Rupp Arena.

“At Rupp Arena you can only see a certain amount of people,” Abbott said. “It didn’t seem as intimidating. At Purdue, I could see everything. It shocked me at first and was my first time to sing in front of that many people. At Rupp I was not so scared that I thought I might drop the mic. It was really fun and I would love to do it again.”

Abbott, who would like to perform on Broadway, is far from ordinary on the track. She set numerous records at Purdue during her All-American career in the 400 and 4×400 relay. She ran the second fastest time in the 400 at Purdue in 51.57 seconds in the NCAA.

The junior says she is training better now than she ever had and is learning to maintain speed and running better times earlier in the season than she ever had. She also says being in the SEC where track is “not just something to get a degree and get through college” but is a sport with big-time athletes and a lot of attention has motivated her.

She’s already part of a UK 4×400 relay team that finished in 3 minutes, 32.15 seconds at Arkansas — the nation’s fourth best indoor time this season.

Her specialty is the 400 where she wants to hit 51 seconds during indoor season so she can get down to 49 seconds outdoors.

“That has been my goal since before college,” Abbott said. “You are going to see a lot more improvement from me here at Kentucky. I want to leave my mark and knock people off that (school record) board just like I did at Purdue.”

Quote of the Week: “I’m not saying he is an Allen Iverson, but if you take a talent like that and put it at the college level, that is close to what you would have from a standpoint of scoring and simply taking a game over with his raw ability and talent. He will be a multiple time NBA All-Star,” Rivals.com recruiting analyst David Sisk on Georgia guard Anthony Edwards, who has UK as one of his final four schools.

Quote of the Week 2: “I will be the most explosive and exciting player in college football next year,” Kentucky sophomore receiver Lynn Bowden.

Quote of the Week 3: “She’s a great guard. She can score three ways, at the basket, she’s got mid-range, she’s got deep three. I think she’s a player in which she’s already made a name for herself, but she’s going to be difficult to deal with for the next — we got her for four years. She’s a player that we recruited too, so I don’t know how close it was as far as her making her decision between us and Kentucky. I don’t know that, but she’s found a good place that she’s able to utilize all of her skillset,” South Carolina coach Dawn Staley on UK freshman Rhyne Howard.