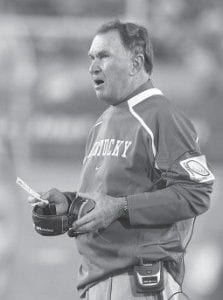 Kentucky coach Rich Brooks looked on during the second half of the Wildcats’ game against Florida in Lexington on Saturday. (AP Photo)

So much for the touchy-feely Rich Brooks.

After watching his team get dismantled during a 41-7 loss to No. 1 Florida, the Kentucky coach offered his typical blunt assessment on how he’ll be in practice this week before the Wildcats face No. 3 Alabama on Saturday.

“I probably get grumpier, ornerier,” he said.

His team gave him plenty of ammunition. The Wildcats (2-1, 0- 1 Southeastern Conference) were dominated in the opening 15 minutes against the Gators, falling behind 31-0 with the kind of shoddy play Brooks thought was a thing of the past.

The Wildcats committed penalties, couldn’t move the ball on offense and seemed to be playing in slow motion while watching Tim Tebow and company do their thing.

“I believe we’re a much better football team than that,” Brooks said. “That should not have happened. As I said a year ago after the Florida game, I thought we were past that kind of stuff, but obviously we’re still not past it. I have got to do a better job of getting my guys focused so those things don’t happen.”

Kentucky doesn’t have a lot of time to pout. Alabama (4-0, 1-0) is arguably playing just as well as the Gators, and while the Wildcats have now lost 23 straight to the Gators, it pales in comparison to the way they’ve been dominated by the Crimson Tide over the years. Alabama leads the all-time series 34-2-1, including a 17-14 win in Tuscaloosa last season.

When asked if Alabama was on par with Florida, Brooks didn’t exactly mince his words.

“They’re not any worse,” he said with a laugh. “Alabama is as good as Florida, just in a different way.”

Alabama’s more conventional offense makes the Crimson Tide easier to prepare for than the Gators, but doesn’t make them any easier to stop.

“The talent and level of play they have is no drop off (from Florida),” said linebacker Micah Johnson. “What Alabama does, they do well.”

Meaning the Wildcats can’t af- ford to get outgained 223-(minus 1) as they did in the first quarter against the Gators. By the time Kentucky managed its initial first down, they were trailing by more than four touchdowns. The scary part? Alabama’s defense — statistically anyway — is every bit as good as Florida’s.

Brooks took part of the blame, saying he didn’t have the team work quickly enough in practice to simulate game speed. His players said the onus is on them to get better. Where a loss like the one against Florida may have led to a season coming undone a few years ago, the Wildcats say they’ve moved past that even if their fans have not.

“Our fans, we love them and they love us, but there are times where they might think ‘Uh oh, there is the old Kentucky team coming back,’ and we don’t want them to think that because that is not us,” said defensive tackle Ricky Lumpkin. “It was just one of those games where it was a tough game against a good opponent.”

Even though he’ll admittedly be a bit crustier than usual in practice, Brooks said the key is to not get so angry his team loses confidence. It’s a fine line, but one feels he has to tread if Kentucky is going to bounce back.