Wildcats get another QB committment

Junior Jarren Williams not only picked UK over Florida State, but he’s already trying to help recruit other players.

Just a few hours after he announced his commitment to Kentucky, Georgia junior quarterback Jarren Williams was on the phone talking to potential future teammates.

“When he walks into a room, he lights up the whole room,” said Anthony Williams, the quarterback’s father. “He makes everybody feel important. He is a leader. He knows how to get guys to do things they need to do in order to win. He takes an interest in them and makes them all feel important.”

He threw for 1,650 yards with 14 touchdowns and 10 interceptions as the starter for Shiloh as a sophomore before transferring to Central Gwinnett in the offseason.

“Those were totally isolated things,” Anthony Williams said. “Jarren was able to evaluate things and go through the process. He wanted to get his decision over early and focus on his season and spending time going back and forth to Kentucky talking to (quarterbacks) coach (Darin) Hinshaw and learning the playbook. This gives him two years to learn and understand the playbook and hopefully play right away. He’s already planning to graduate (from high school) early to enroll at UK. 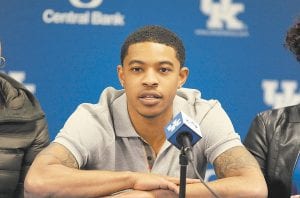 Various national media members believe the Phoenix Suns made a wise decision by taking Tyler Ulis in the second round of the NBA Draft after others had passed on him. (Photo by Vicky Graff )

“My wife and I and Jarren went up there a few weeks ago. I liked the integrity of the coaching staff. He talked to the players and got a good understanding of the direction the program was going. He also wants to go to a program where he can build his own legacy and help turn a program around. I admire him for that. He could go to schools with a winning tradition, but he wants to help turn the Kentucky program around.”

Paul Thomas, a sports writer for the Gwinnett (Ga.) Daily Post, was not surprised that Williams picked UK over Florida State, Louisville and at least seven other schools that offered him scholarships already.

“They were on him early and they’ve done a good job staying on him. He’s already visited the Kentucky campus twice on his own, including going to a camp session this summer. It did surprise me that he committed so early,” said Thomas. “He only recently started to see offers trickle in and just last week he worked out for Urban Meyer (of Ohio State) and his staff as Central Gwinnett hosted a satellite camp. (Mississippi State coach) Dan Mullen was also in attendance. Williams told me that Meyer didn’t offer him yet, but said he wanted to get him to Columbus for a visit in the future.”

Many describe Williams as a dual-threat quarterback. Thomas says he can run, but not to underestimate his passing skills.

“He’s got the frame and he’s athletic enough to make plays with his legs, although I don’t think he’s a guy who is looking to take off after just one or two reads. He can clean up his footwork a bit he says, and I think he has a chance to really develop into a great passer,” Thomas said.

His father, who coached him through middle school, says he can run or pass.

“But more than anything, he will do what he needs to win a football game,” Anthony Williams said.

The quarterback’s father said his son has always been mature for his age and that visits to other campuses had convinced him to “chart his own path” in college.

“Kentucky just felt like home and family,” Anthony Williams said. “He didn’t really grow up a Georgia fan. He liked Georgia, liked TCU, liked Ohio State, liked Florida State. But he didn’t have to go to one of those schools to be happy.”

Thomas sees Williams staying happy with Kentucky even though it is at least 18 months away before he can enroll at Kentucky.

“A lot can happen between now and then. I think more schools will still jump into the mix for him as he gets more film out there this season. I would expect him to stick with Kentucky, but opposing coaches won’t make it easy on (Mark) Stoops and company,” Thomas said.

Courtney Love was a two-time All-Ohio selection at Cardinal Mooney High School who had 110 tackles as a senior and 130 as a junior when his team won the state title. He was ranked among the nation’s top 30 linebackers when he picked Nebraska over Florida State, Ohio State, USC, Oklahoma, Notre Dame, Michigan State, Illinois and Indiana.

He redshirted during the 2013 season at Nebraska and played in 12 games in 2014 and had six tackles before transferring to Kentucky and sitting out last year.

“I wouldn’t say I enjoyed last year but I embraced it. I knew what my role was for this team once I had to sit out. I knew I had to make myself better and get the team better,” Love said. “Make the offense better, work out with special teams, work harder in the weight room. I feel like that was a big thing for me. I got to see myself improve and help others improve also.

And what should Kentucky fans expect to see out of him when the season starts in September.

“I definitely think fans should expect to see a very resilient, tough, accountable player. I thrive on discipline. That is what I was brought up on. My dad is ex- Marine. Discipline is huge in my roots. That’s one thing I have really strived for and that is something you can expect to see from me,” he said.

Point guard Tyler Ulis was mentioned as a potential lottery pick a few weeks ago. Then rumors surfaced that the former Kentucky point guard had a hip injury that had never been mentioned during his two years at Kentucky.

Finally, Kentucky coach John Calipari said during several ESPN appearances on draft day that he worried Ulis’s weight — less than 150 pounds — was costing him in the NBA draft and could force him to fall out of the first round.

Calipari was right as Ulis — who some thought might go to Chicago, his hometown, with the 14th pick — did not get drafted until Phoenix took him with the 34th pick overall last week. That means he joins Brandon Knight, Eric Bledsoe, Devin Booker and Archie Goodwin, all guards with the Suns and all former UK players.

Ed Isaacson of NBAdraftblog.com had warned that Ulis might fall in the draft as he did.

“A lot will depend on what a team flagged on the hip issue. Rumors get started and you are never quite sure of the validity and how teams view that,” Isaacson said before the draft. “But also if you are going to be under 6-foot in the NBA right now, you have got to be solidly built to take the punishment or an explosive athlete.

“There were a lot of concerns when he got to the combine and weighed in less than 150 pounds. I am not sure how much he can add to that frame, not sure how physical he can be. in workouts, according to a lot of people, playing against bigger guards wore him down.”

However, Ulis has never been afraid of a challenge and the one silver lining for him is that he will be reunited with Booker, a longtime friend and a major reason Ulis came to UK. The Suns also seemed thrilled to have him

“He’s tough, he’s smart and he’s a winner,” Suns General Manager Ryan Mc- Donough said. “We think, frankly, the only reason he’s (in the second round) is because of his size. Once he was there, that was too good to pass up.”

Several draft analysts liked what the Suns did taking Ulis.

“They took one of my favorite prospects in the draft in Ulis, who is just a gamer in every sense of the word. He’ll figure out an NBA role,” Sam Vecenie of CBS Sports said.

“Adding Ulis in the second was great. If he were three inches taller, he would’ve been a top-10 pick. Things just got brighter in the Valley of the Sun,” ESPN’s Chad Ford said.

The biggest endorsement came from Fox Sports’ Aaron Torres, who recently wrote a book — “One and Fun” — on John Calipari’s first team at UK.

“The reason the Suns get an A- is their pick-up of Tyler Ulis in the second round. Sure, it plays up the moniker of the ‘Kentucky Suns’ even further. At the same time, Ulis will bring immediate toughness and leadership to a super-young team. Even if he’s only a backup, Ulis immediately makes Phoenix better simply by being in their locker room,” Torres said.

With all the attention on quarterbacks Drew Barker and Stephen Johnson during spring practice, it was easy to forget about true freshman quarterback Gunnar Hoak. But offensive coordinator Eddie Gran paid attention.

“Gunnar is a quiet guy. He has a lot of poise. That is what I liked about him,” Gran said. “At the beginning of spring practice, things were coming fast at him and he kind of figured it out. He is smart. He really understands what it takes.

“He is not that rah-rah guy, but he is very poised in there. He sits in that phone booth (pocket) and that is hard to do as a freshman who left high school early. For him to come in and do that stuff and not see him scatter brained and running all over the place, that’s something we can build on.”

Gran said he would “absolutely” prefer to redshirt Hoak to let him watch and learn behind Barker and Johnson.

“Any time you have a freshman quarterback you would like to do that and get him bigger, stronger. But if he can do it now, then let him play if it works out that way. But redshirting him would be ideal,” Gran said.