Wildcats have many weapons available 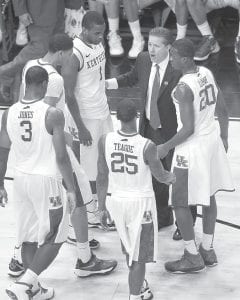 UK coach John Calipari talked with his players in the second half of their NCAA tournament game in Louisville. Kentucky beat Iowa State, 87-71, and advanced to play Indiana.(AP photo)

Every player in Kentucky’s seven-man rotation has led the Wildcats in scoring for a game this season.

That balance put opponents in a bind, wondering which star to focus on defensively.

Kentucky coach John Calipari has a pretty good idea what counterpart Tom Crean will try when Indiana (27-8) meets the Wildcats (34-2) on Friday in the South Regional semifinals in Atlanta. He thinks the Hoosiers plan will force point guard Marquis Teague and forward Michael Kidd-Gilchrist to carry the offense.

“What Indiana is going to do is they are going to back off of Teague and back off of Michael Gilchrist. The only issue is it’s dangerous because we’ve all seen those guys have big games,” Calipari said Tuesday. “What you’re hoping is well let’s hope that they’re not making shots. That’s what I think that they would do.”

The Hoosiers are one of two teams to topple the Wildcats, but the two freshmen had strong performances in Indiana’s thrilling 73-72 win on Dec. 10. Kidd- Gilchrist had 18 points and nine rebounds; Teague 15 points and five assists.

“That was so far, that was like a season ago, literally, four months ago. That was so long ago I had to watch the tape to remember anything,” Calipari said. “But (Indiana) played well. One thing about it, we’re better, but so are they.

“Both teams are way better than they were then.”

Teague became the seventh player to be the team’s leading scorer to help Kentucky reach the round of 16. He put together the best scoring night of his career with 24 points in an 87-71 victory over Iowa State on Saturday night.

“He was the main part of us winning,” senior Darius Miller said. “He did a great job. He was even talking to us, being vocal, talking to us about what we needed to do. He was putting guys in great places on the floor and just being a great floor general.”

Kentucky has been sharing the wealth offensively all season.

“ They have a lot of multidimensional guys. They can score from 3, they can score on the pull up and they can get to the rim,” Crean said. “John is such a good coach for a lot of reasons, but I think more than ever this year, this team really shares the basketball. And those guys are just scratching the surface of where they’re going to be.”

With four more blocks, Kentucky will surpass Connecticut’s 2004 record of 315 blocks in a season thanks primarily to Davis, who has a nation’s best 166. The Wildcats also lead Division I in field goal percentage defense at 37 percent.

“What we are is a good defensive team,” Calipari said. “We’re an athletic team. We’re a driving team. If we make 3s, we’re a really strong team.”

Calipari often says that all of his players averaged 25 points a game in high school and could score that many in college with a corresponding number of shots.

“They share,” Calipari said. “I’ve got a good crew, a good group of guys.”

All seven averaged at least 19.6 points in their respective senior years with Davis leading the way with 32 points, 22 rebounds and seven blocks as last year’s consensus No. 1 recruit in Calipari’s third straight top recruiting class.

Davis continues to win numerous accolades, becoming Kentucky’s first winner of the Oscar Robertson Trophy on Tuesday, the national player of the year selected by the U.S. Basketball Writers Association.

“The recognition is nice, but I want to win the biggest award of them all and that’s the national championship,” Davis said. “I have to stay humble and keep working.”

Calipari has maintained all along that they’re only focused on their own games and not what’s ahead in the bracket or the tournament, so he’s not playing up the rematch with Crean or the Hoosiers.

“It’s about how do we play our best. Let’s not get too fancy. Let’s not get too crazy,” Calipari said. “ This isn’t like the trick them time. When you end up trying to trick at this time of the season, you know who you trick? Yourself. You trick yourself.