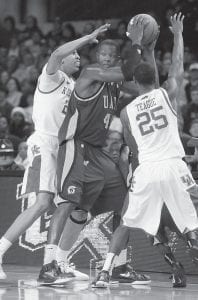 Arkansas-Little Rock’s Michael Javes, center, was trapped by the defense of Kentucky’s Anthony Davis, left, and Marquis Teague during the first half of their NCAA college basketball game Tuesday at Freedom Hall in Louisville. (AP Photo/Timothy D. Easley)

Chuck Guy went to the locker room believing Arkansas-Little Rock was poised to take down No. 2 Kentucky after outplaying the Wildcats over the first 20 minutes. The Trojans couldn’t handle what came next.

Kentucky freshman Anthony Davis had 22 points and 16 rebounds, and the No. 2 Wildcats overcame a slow start with a big run that put away Arkansas-Little Rock 73-51 on Tuesday night.

“I expected us to win it,” said Guy, who finished with 19 points. “It didn’t turn out like that, but we played as hard as we could.”

Davis’ layup changed the lead for the eighth and final time just over a minute later. Freshman Michael Kidd-Gilchrist hit a 3-pointer, Davis added a jumper, and Miller madea3tojointhe1,000-point club and give Kentucky a 45-35 edge with 11 minutes left.

It was 54-35 after Doron Lamb’s layup with 8:35 to go. UALR went nearly 10 minutes between field goals before Courtney Jackson’s layup.

“They picked it up a lot on defense in the second half,” Trojans center D’Andre Williams said. “It was more intense. You can really tell. You could feel the pressure.”

UALR made the NCAA tournament last season, but graduated its top three scorers, including Sun Belt Conference player of the year Solomon Bozeman. Will Neighbour had picked up some of that void, averaging 18.3 points and eight rebounds over the last two weeks, but he injured his right shoulder in the final minute of a win at Denver.

Even with Neighbour out, UALR took it right to the Wildcats early, despite being a 28-point underdog. Williams scored 11 points, and Jackson added 11 rebounds.

“That was a big concern without Will, he’s a man,” Williams said. “But you’ve got to believe.”

Darius Miller finished with 15 points and Terrence Jones added 10 for the Wildcats. Kidd-Gilchrist grabbed 10 rebounds in 31 minutes despite playing with a chest injury.

Guy dove over the Trojans’ bench into the second row to unsuccessfully save a loose ball, then nailed consecutive 3-pointers in the closing minutes of the first half.

After the sophomore’s second, he held three fingers out and pumped his hands in joy as he gave UALR a 30- 25 lead, its biggest of the game. The Trojans held a 30-27 lead at halftime, but Davis and the rest of the Wildcats made sure it wouldn’t last long.

“Our guys played with great effort with Will,” UALR coach Steve Shields said. “We certainly missed Will not being here, but we had some guys who stepped up. As we tell our guys, every team’s success is determined by how they handle adversity.”