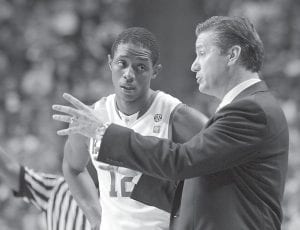 Kentucky guard Brandon Knight listened to coach John Calipari during the second half of Kentucky’s 91-57 win in an NCAA college basketball game against Boston University in Lexington on Tuesday night. Knight had 23 points. (AP Photo/Ed Reinke)

The Kentucky players wore black socks on Tuesday night against Boston University in honor of the mother of coach John Calipari. Donna Calipari passed away on Sunday following a lengthy battle with cancer.

The simple gesture was a sign of respect and support, one small way for the Wildcats to pay tribute to their mentor.

“He always says that we’re his family and we felt like we needed to give something to coach,” freshman guard Brandon Knight said after scoring 23 points.

The 10th-ranked Wildcats made an even bigger statement with their play, dominating the second half of a 91-57 win by playing the kind of selfless, aggressive basketball Calipari said was lacking in a loss to Connecticut last week in the Maui Invitational.

Talking on defense at one of the court and sharing the ball at the other, Kentucky (5-1) swarmed the overwhelmed Terriers (4-4) with arguably their best 20 minutes of the season.

“We drove the ball and passed the ball better in the second half,” said Terrence Jones, who had 18 points and 10 rebounds for the Wildcats. “It opened the game up. We knocked down shots. That’s the team we need to be all year. That’s when we play our best is when everyone is involved.”

Kentucky led by just seven points at halftime and could hear the Terriers whooping it up in the locker room at the break, eager to send the Wildcats on their first losing streak of Calipari’s tenure.

Boston U.’s optimism lasted only a few moments into the second half. Jones and Knight kick-started an 18-3 run that quieted the Terriers and brought a sleepy Rupp Arena to life.

“We can’t let teams come in here and be ‘rah, rah, rah,’” Knight said. “We need to have our own intensity, be talking and let them know that it’s not going to happen.”

John Holland led Boston U. with 20 points but the Terriers shot just 29 percent and had no answer after the Wildcats hit the gas.

“That must have been one heck of a halftime speech,” Boston U. coach Patrick Chambers said. “I’m going to have to ask him for a copy of that.”

Calipari wasn’t telling. He opted not to come out for postgame interviews, instead instructing assistant coach John Robic to talk to the media.

It’s been a difficult six months for Calipari. He went public with his mother’s illness over the summer and has made frequent trips to visit her in North Carolina while somehow not missing any Kentucky practices.

He flew from Lexington to Charlotte on Sunday after hearing of her passing but was back at practice Monday afternoon and on the sidelines Tuesday night. While the players wore black socks, Calipari and his staff donned black suits while some fans — particularly in the student section — sported black T-shirts.

Calipari thanked everyone for their support before the game via his Twitter and Facebook accounts, saying he was sure his mother was watching from “the luxury boxes with a whole crew of UK luminaries cheering right along with her.”

His players say they haven’t noticed a change in Calipari’s demeanor, but they knew he was hurting. The last thing they wanted him worrying about was their play.

Calipari chastised the Wildcats for being too selfish following the loss to UConn, saying they hadn’t learned how to play together when adversity struck. He urged them to turn up the volume on defense and make the extra pass on off ense.

The Wildcats proved they were listening against the Terriers.

“We shared the ball, we made the right plays in the second half and that’s something that we stress,” Robic said.

The game-turning run started slowly with two free throws by Jones before the Wildcats really heated up. Doron Lamb hit a runner in the lane, DeAndre Liggins knocked down a 3-pointer and Knight followed with a pullup jumper following a steal by Lamb.

Knight drilled a 3-pointer on Kentucky’s next trip before a layup by Jones and a 3-pointer by Darius Miller mushroomed the lead to 57-36. Chambers then received a technical foul and Jones hit a free throws, but the Wildcats were just getting started.

“We were hoping to just hang and hang as long as we could and that spurt in the first five minutes was just crushing, absolutely crushing,” Chambers said.

Josh Harrellson tipped in a miss by Jones then added a layup off a nifty no-look pass from Jones. Miller and Lamb added 3-pointers — Kentucky made 10 of 16 3-pointers on the night — and by the time Miller converted an alleyoop the Wildcats were up 70-40 and could start thinking about a showdown at North Carolina on Saturday.

It’s a challenge the Wildcats feel they’re ready for, particularly after the loss to UConn. The long flight back from Hawaii wasn’t fun, but Knight felt it was necessary.

“It was a blessing because if we would have won that game we still would have had a lot of faults we weren’t going to fix because we were winning,” Knight said. “I think that the loss kind of helped us see where we were at really and what we need to do going forward.”