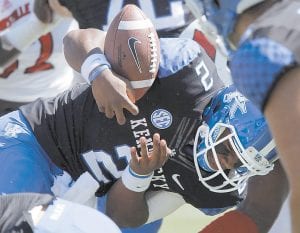 Kentucky’s Jalen Whitlow (2) fumbled the ball for a turnover in the first quarter against Louisville in Lexington. (AP Photo/James Crisp)

Even though this year’s Governor’s Cup game with the University of Louisville ended smack on the nose where the boys in Las Vegas predicted it would with a 14-point spread in favor of the Cardinals, how the game arrived at that ending was a completely different story than what all of us so-called pigskin prognosticators predicted it would be.

As a matter of fact, for the entire first half it was basically an old-fashioned smash mouth college football game spattered with numerous dropped passes by Kentucky receivers and missed opportunities for turnovers by the Wildcats’ defense as well. UK wasted so many opportunities that it should have never let the Cards pull away to a 20-6 lead heading into the final quarter.

Still, halfway through the final quarter, Coach Mark Stoops’ troops exhibited some of that toughness and never-say-die attitude that he has been preaching about wanting to instill into the Wildcat program.

With just under 5:00 left, UK had the ball with an excellent chance of cutting UofL’s lead to a one-touchdown margin. Didn’t happen. The Cats came up short, 27-13.

Probably of more concern to UK this week is that sophomore quarterback Maxwell Smith went out with another arm/shoulder injury and stayed out for most of the second half. However, Smith did inform the media in his post-game interviews that he felt similar pain before and was able to resume play within a week. With UK idle this weekend, Smith felt sure he would be back by the Florida game.

UK is now 1-2 on the 2013 season after the loss to Louisville. That’s the bad news, but it may not be as bad as it seems because three games into the Mark Stoops era it’s beginning to show that Stoops is instilling toughness at UK not seen since Jerry Claiborne was the coach. Meanwhile, Neal Brown, UK’s creative offensive coordinator, has tweaked his own version of the Air Raid offense with a special emphasis on the running game. Brown’s plan is starting to take shape, albeit with limited talent at certain positions plus extremely young and inexperienced talent at others.

By the time the next game for the Governor’s Cup is played — at the end of the 2014 season when Terry Bridgewater is in the NFL and Louisville has played a full-season schedule in the ACC — it should be a very interesting football game with the rivalry atmosphere making for a special Thanksgiving holiday.

Until then, UK must keep improving and hold on to the commitments it has gotten for its Top 15 recruiting class for 2014. Louisville must figure out a way to hold onto Coach Charlie Strong. Both tasks will be difficult to accomplish.

• Defensively, UK has its highest percentage in stopping thirddown conversions to its opponents in many years. The Cats ranked second nationally going into the Louisville game.

• The Air Raid tandem of Maxwell Smith and Jalen Whitlow has completed 60 of 100 pass attempts with five touchdowns and only one interception, averaging 277 yards a game.