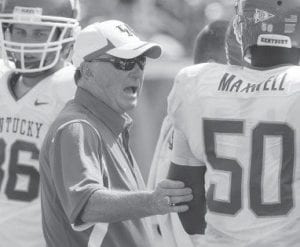 Kentucky linebacker Micah Johnson remembers all the raised eyebrows he drew when he opted to sign with the Wildcats rather than Louisville four years ago.

Kentucky was struggling under Rich Brooks. The Cardinals were a perennial bowl team and burgeoning Big East power under Bobby Petrino.

Johnson, however, bought into the rebuilding plan Brooks was selling. And while he isn’t one to say “I told you so,” he is relishing how swiftly the balance of power in the Bluegrass has changed over the last three years.

When the two archrivals meet on Saturday in the Governor’s Cup, the Wildcats (1-0) have a chance to do something that hasn’t been accomplished since the series was renewed in 1994: win three straight over the hated Cardinals (1-0).

“The last two years we were able to get them and I think that would be pretty big for me and the guys that came here (when we were down) to win another game,” Johnson said.

For the first time in a decade, the Wildcats will be prohibitive favorites. They were dominant in a season-opening 42-0 win over Miami of Ohio, while the Cardinals struggled to get past woeful Indiana State.

Not that the Wildcats are embracing their role of bully.

They remain wary of the Cardinals, even if Louisville hasn’t been the same since Kentucky won 40- 34 at Commonwealth Stadium two years ago. The Cardinals are just 10-12 since Kentucky’s Andre Woodson hit Steve Johnson on a 57-yard touchdown pass with 28 seconds remaining to pull off the upset.

“I have a feeling (Louisville) will be back,” said defensive tackle Ricky Lumpkin. “They’ll be back in swing of things. You can’t let them (bust) out. Maybe this could be the game, this could be the year. You never know. The season is brand new. It’s going to be an exciting game for them and for us. Rivalry games tell you a lot about what a team is going to do that year.”

Louisville, fresh off an Orange Bowl victory, came to Commonwealth Stadium ranked in the Top 10 under new head coach Steve Kragthorpe. The Wildcats, meanwhile, were looking for respect after losing seven of eight to their rivals.

Kentucky found it when Louisville wide receiver Harry Douglas was tackled a few yards short of the end zone on a lastsecond Hail Mary, setting off a jubilant scene that ended with fans storming the field and sent the two programs heading in opposite directions.

“It was a real big game because you saw what happened,” Lumpkin said. “Our program is still going up and right now it looks like theirs is going down.”

While the players point to the win in 2007 as a tipping point in the balance of power within the state, Brooks is hardly ready to play “remember when.”

“Two years ago seems like it was 20 years ago to me, rather talk about games coming up,” he said. “To me it has no bearing on this game.”

Instead, he said the Wildcats will have to play better than they did in a season-opening 42-0 win against Miami of Ohio. Still, after starting 0-4 against the Cardinals, he admits things are much quieter for him when he goes out now that the Wildcats have won two straight.

“You hear it on the talk radio, you see it on the message boards, you see it everywhere and you see it when you’re out in public,” he said. “You get constantly reminded of that side of equation you’re on.”