By KEITH TAYLOR
The Associated Press 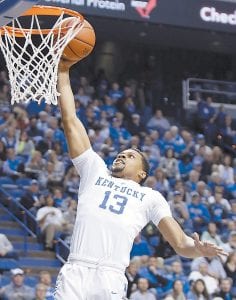 Kentucky’s Isaiah Briscoe dunked during the first half of UK’s win over Mississippi State Tuesday night in Lexington. (AP Photo)

Kentucky didn’t get much scoring from its post players, but the backcourt saved the day for the 14th-ranked Wildcats in an 80-74 victory over Mississippi State on Tuesday night.

The Wildcats’ inside trio of Marcus Lee, Alex Poythress and Skal Labissiere combined for 13 points but the Wildcats relied on their backcourt to fend off the pesky Bulldogs.

“When we have guys no show us, we have to figure how to play and win,” Kentucky coach John Calipari said. “Give them (Mississippi State) credit. They didn’t stop playing. If they had not turned the ball over (in the first half ), they probably would have beat us.”

Although the performance was uninspiring, the Wildcats (13-3, 3-1 Southeastern Conference) have won nine straight over the Bulldogs and 12 consecutive league games at home.

Freshman guard Jamal Murray carried most of the load, scoring 22 points. Point guard Tyler Ulis added 21 points, including 14 in the second half, and Isaiah Briscoe had 14 points for the Wildcats.

“It was a tough night for our bigs,” Murray said. “Our guards did a good job scoring and we just kept doing that. That took the pressure off the bigs.”

Ulis said Kentucky’s lack of consistency is “frustrating as a team.”

“Some guys give their all and some choose not to play,” he said. “That is hard for us to get a good win that way and why they came back.”

Mississippi State (7-8, 0-3) rallied from a 20-point deficit in the second half and trailed 74-71 with 1:14 remaining, but the Wildcats made six free throws over the final 47 seconds to seal the win.

Murray made two of his first three shots — both 3-pointers — and scored 11 of Kentucky’s first 17 points. Murray connected on three 3s and scored 11 points in the first half.

The Bulldogs got 20 points from Craig Sword, followed by Malik Newman with 14 and Gavin Ware with 11.

Mississippi State closed the first half on a 12-6 run to make 39-31. Derek Willis hit two 3-pointers in the spurt and finished with eight points.

While Murray set the tone for the Wildcats in the first half, Ulis got Kentucky off to a fast start in the second half, scoring seven of the team’s first 10 points, pushing the margin to 53-33 with 14 minutes remaining.

Despite the surge by Kentucky to open the second half, the Bulldogs fought back and turned a potential blowout into a nail-biter down the stretch.

“ There were a lot of things that I just look at and shake my head,” Calipari said. “But, this is what happens when you’re this young. We did win the game and we march on.”

Poythress, who scored a career-high 25 points in Kentucky’s last outing, a 77- 61 win at Alabama, scored just six against the Bulldogs. His biggest contribution was making four crucial free throws in the final minute.

“Alex made free throws down the stretch and showed a lot of courage,” Calipari said. “But in the guts of that game, he was not a factor and when you’re that good, you need to be a factor.”

Poythress has scored double figures in six games this season.

Kentucky junior Dominique Hawkins missed his third straight game after spraining his ankle in Kentucky’s win over Ole Miss on Jan. 2 and is listed as day-to-day.

“We need Dom back badly,” Calipari said. “We are playing some guys that don’t deserve to be in there.”

Kentucky: The Wildcats extended their home winning streak to 30 games, the fourth-longest in school history. … Murray has hit a 3-pointer in his first 16 collegiate games, a school record.

Kentucky: is at Auburn on Saturday