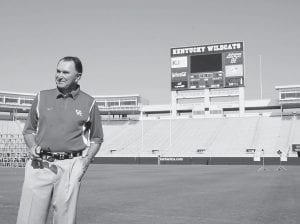 Kentucky coach Rich Brooks waited for players to arrive for pictures during the team’s media day on Aug. 7 for the upcoming NCAA college football season in Lexington. (AP Photo/Ed Reinke)

Kentucky football players printed T-shirts emblazoned with “Finish” to push them through summer workouts then it dawned on them the message might be even more relevant once the season begins.

The longtime Southeastern Conference cellar-dwellars have started each of the last two years strong, only to finish with a whimper. The Wildcats lost four of their last five regular season games both times, landing them in the Music City and Liberty bowls, respectively, when the postseason destination could have been grander.

“We have a lot of areas we need to make better if we want to make that all-important climb up the SEC ladder,” coach Rich Brooks said. “We’ve shocked a few teams the last three years, but we have not shocked enough.”

Of course, as the Wildcats launch their quest for a programfirst four consecutive bowl appearances, starting might be even more difficult than finishing this year considering the early schedule that looms.

After two nonconference games, Kentucky opens its tough SEC lineup with national champion Florida, Sugar Bowl representative Alabama and a South Carolina team whose coach, Steve Spurrier, has won all 16 games against Kentucky — dating back to his years with the Gators.

Defensive tackle Corey Peters says for Kentucky to reach the next level, players can’t be fearful of facing marquee opponents, regardless of when they play them.

“We want to get to that level where 10-2 is an unsuccessful season — that a coach should be fired if you go 10-2,” Peters said.

Offensive coordinator Joker Phillips, who has been tapped as Brooks’ eventual successor, is predictably unsure about setting the bar quite that high, but he understands the sentiment.

“We are headed in the right direction,” Phillips said. “This game is difficult. If the ball bounced one or two other ways, we probably would have had 10 wins in one of those last three years. And if it bounced the other way, we could have had four wins.”

Instead, Kentucky has found itself somewhere in between the doldrums of its past failures and arriving as serious — and regular — contenders.

There have been moments in recent years when the Wildcats have forced the rest of the nation to take notice, such as a tripleovertime victory over No. 1 and eventual national champion LSU in 2007. Still, the players say they need far more of those to become truly elite.

“Last year we had a mediocre mindset,” quarterback-turned-receiver Randall Cobb said. “Going into the season there were games we didn’t think we could win honestly. This season I can tell, just by looking around the locker room, we’re more humble and more hungry. We’re hungry to get the victories people say we’re not supposed to get.”

Linebacker Micah Johnson and cornerback Trevard Lindley are back for their senior seasons to anchor the defense, even though both considered jumping to the NFL a year early. Johnson knows the defense is younger, but Brooks keeps preaching that it could actually be better than last year’s squad that was one of the best in the country in tackles for loss.

However, the defensive line — last year’s strongest unit, took a major blow in the offseason when end and vocal leader Jeremy Jarmon tested positive for a banned substance he blamed on a weight control supplement. The departure of Jarmon, who was taken by the Washington Redskins in the NFL’s supplemental draft, leaves a critical void.

“It’s one of the things we have to adjust to — just suck it up, put our head down and go,” defensive tackle Ricky Lumpkin said.

Offensively, the team still isn’t expected to return to the days of two years ago when quarterback Andre Woodson, receiver Keenan Burton and tight end Jacob Tamme led one of the nation’s most feared passing attacks, but it should be more experience than last year.

Mike Hartline, who got his job by default at last year’s media day when his top challenger was kicked off the team, now opens camp as the unquestioned starter. That could change on a whim, though, with two highly touted freshmen quarterbacks brought in to push him.

Hartline says he has grown as a football player since his first year as a starter, but mostly his confidence has grown after an impressive Liberty Bowl performance.

“I’m very confident in what I want to do, what I have to do to become a great quarterback in the SEC,” Hartline said.

Cobb, who wrestled the starting quarterback job away from Hartline at one point last season before getting injured, now has made the full transition to receiver and figures to be one of the team’s major offensive weapons. He’s still only a sophomore, but says he is now comfortable with his role.

“I’m more calmed down now,” Cobb said. “I don’t remember half the stuff that happened last year honestly. Everything went so fast. Everything’s starting to slow down for me now.”

And looking up for Kentucky football.