Wildlife is high life for these women 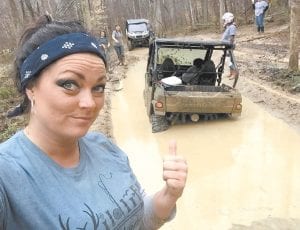 THUMBING A RIDE – Bridgette Holbrook was in a little over her knees on a four-wheeler run. (Photo courtesy Wildlife Women)

Kentucky’s newest hunting and fishing guru is as comfortable in mini-skirts and pink stilettos as camouflage overalls and snake boots.

And she’s helping other women get comfortable in the great outdoors.

Whitesburg native Bridgette Holbrook founded a nonprofit corporation called Wildlife Women that gets women out in the woods, mostly without men, to learn to shoot, hunt, fish, hike and four-wheel.

“We educate and inspire and encourage women to get outdoors and enjoy nature,” she said.

Holbrook started on her new path because her daughter was allergic to most kinds of food that was bought in a store, and she wanted a way to feed her without health issues.

“Her dad started hunting and we realized she could eat wild game without any repercussions,” she said.

When her daughter was 12, Holbrook and her husband divorced, and men she dated started taking her hunting, and making sure she had wild game in the freezer for her daughter. Then, one year she wasn’t in a relationship and went hunting alone. 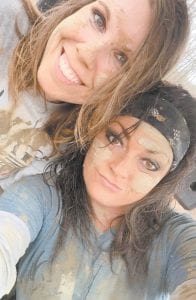 “I thought I was doing pretty good, but obviously I wasn’t because I didn’t get anything that year,” she said.

Holbrook retreated to the top of Pine Mountain to contemplate the fix she was in, and decided she didn’t want to have to depend on someone else to hunt for her. She wanted to learn to take care of her own hunting, and she thought other women might as well. She sent an Internet message out, and women started showing up to go hunting and fishing. First it was 54 women. Then it ballooned.

Holbrook put the number of paid members at around 30 last week. Wildlife Women Vice President Melissa Blair, who takes care of the group’s web page and social media presence, said Tuesday that that membership getting closer to 100. 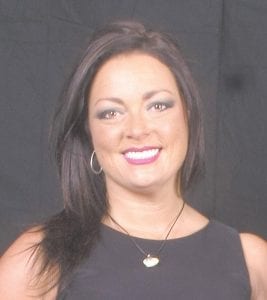 Events range from as few as three to as many as 25 participants, Blair said, and it’s growing all the time. An all-terrain vehicle event called Mud and Mascara drew around 10 women to play in the mud, Blair said.

Blair said she grew up fishing because her parents owned a place on Lake Cumberland, and squirrel hunting.

“If we weren’t on Lake Cumberland, we were on Carr Fork,” she said.

Blair said she and Holbrook went to different high schools, but both were in band and were sometimes were the only two girls on all-star band trips. She was one of the first 54 to answer Holbrook’s original message, and said because of the outings, she’s confident enough to hunt on her own.

Holbrook said she never used a gun to hunt until last year because she grew up with “an intense fear” of guns, and was terrified to hold one.

“I was a bow hunter all the time because I was scared,” she said.

She had taken several deer with a bow, but last year, she killed a deer with a rifle for the first time — a mule deer in Washington State.

Wildlife Women has arranged classes through Kentucky Fish and Wildlife, the National Wild Turkey Federation and the National Rifle Association. Most of the classes are open to women only, but some are open to men and to families.

“Women are real comfortable learning to shoot when it’s just them there,” Holbrook said.

Memberships are also available for men and families, as well as women. Several stores and organizations also offer discounts to the group’s members.

Wildlife Women has 18 chapters in Kentucky, and has just started chapters in West Virginia, Virginia, Alabama and New Jersey. It starts a cable access reality show on TVS Cable Channel 24 at 7 p.m., Thursday, and will have a kickoff party at Pine Mountain Grill in Whitesburg at the same time.

“We did have a lot of videos on YouTube, but we had to take them down for the TV show,” Blair said.

Blair said money from memberships and fundraisers will go to run the nonprofit, provide classes, and start a scholarship fund.