Will Calipari vs. Pitino overshadow UK vs. UofL? 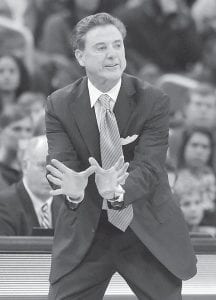 Traditionally, the University of Kentucky versus the University of Louisville basketball game has been one of those unique sports rivalries that needs no drama added, yet recently many storylines have been lurking in the background to sweeten the pot, so to speak, for the winning team and coach.

Trust me, sports fans, these two institutions, their athletic departments, basketball programs, fans, and head coaches have never valued a win over the other more than this New Year’s Eve.

Let’s set the stage for this years feature hoops game for the Commonwealth of Kentucky.

Story line No. 1 — Which court is fit for kings?

Last year’s game was the first in the plush new state of the art KFC Yum! Center in Louisville and this year it will be played in old “rundown” Rupp Arena. Translated, this means that Big Brother (UK) has the highest paid coach in the state, seven NCAA titles, well over 2,000 wins and the largest and most loyal fan base. Therefore in his eyes he is supposed to have a shinier, prettier, and more modern playhouse than Little Brother (UofL). At the moment he doesn’t and it is not a stretch to say he may never. 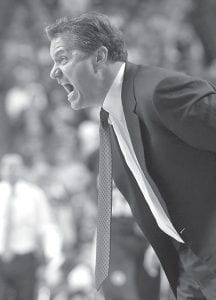 To add insult the governor (Ernie Fletcher) that spearheaded some state funding for this basketball palace and the designer/ promoter of this particular project (Jim Host) are both, yep you got it, UK graduates. Now UK is in the fight of it’s life just to keep up with the ever changing landscape of college basketball, and it appears several of those same people (some behind the scenes) who opened their arms wide for construction of the Cards’ new perch are having reservations about building or even renovating a new venue for the Cats.

In recent days the new UK president has basically thrown in the towel on any building construction except for classrooms and dorms while Coach John Calipari has all of a sudden downgraded his vision for the future to a gold standard-type reinvention for Rupp Arena. This story is and will be ongoing far into the future, but you can take it to the bank there will be some venting exercised this Saturday if the opportunity presents itself from the UK side.

Story line No. 2 — Did Rick Pitino’s “mistake” eventually give Cal his shot?

Rick Pitino has stated on several occasions since returning to the Commonwealth and taking over at Louisville that possibly his greatest mistake in his coaching career was leaving UK which, in his own words, was considered to be the Roman Empire or New York Yankees of college basketball. Too add embarrassment to that decision — and this is rarely talked about in the media but well known — when Pitino returned to the NBA and Boston, his own Celtics players (actually two of his own former UK players) reportedly stood their ground and intentionally played him out of NBA coaching because of his strict and demanding tactics they had to adhere to in Lexington but not professionally.

Calipari now has the keys to Pitino’s once proud castle and is welcoming some of those same ex- Pitino players back to the Big Blue flock in Lexington just to rub salt into Pitino’s ugly Boston wound. The other problem since Cal has been in the state — or should I say difference between former coach Tubby Smith and Calipari — is that Cal throws any and all remarks toward Pitino and/or Louisville that he can garner up. Cal will not let the UK-UL rivalry lie for a week, while Smith just rolled with the flow and never created any mischief between the two schools or fans. Cal thrives on creating negative dialogue between the two programs and rarely worries about how or if the fire he starts is put out.

Tubby Smith and Rick Pitino were golfing buddies and occasionally made commercials together. Calipari and Pitino don’t even speak when they bump into each other on the recruiting trail.

There is also the story that’s been told about former UK coach Billy Gillispie calling Pitino in the middle of his second and final season at UK to ask for some scouting information on a team coming up. Since the Cats and Cards had already played each other, Pitino tried to be cordial and informative while asking Gillispie how things were going at UK. Gillispie supposedly responded by saying, “I’m fine. They understand the situation I’m in personnel wise and support me.” Pitino reportedly answered, “Be careful, Coach. There’s eyes and ears in Lexington that has roots straight to the A.D. and president.”

Pitino knew that Calipari had been skipped over once by UK when Gillispie was hired and feared he couldn’t dodge the bullet a second time if Gillispie failed to head Pitino’s advice. Of course, Gillispie made Pitino out to be a prophet when, two months later, those same understanding UK administrators fired Gillispie at noon two days after his last game and gave him and his three full-time assistants until 5 p.m. that same day to move everything out of their offices in the Joe Craft Center.

Story line No. 3 — Why did Pitino and Cal end their friendship?

Both Pitino and Calipari admit to being coddled and raised through the Howard Garfinkel Five Star basketball camp. They were at one time as cordial, friendly, and respectful of each another as any two coaches in the college coaching fraternity. Pitino being a few years older, he got his start earlier and as most coaches do tried to guide and help younger coaches.

By the mid-90’s, Pitino had as much credibility among college athletics directors and president as any coach on the college scene. That’s when the University of Massachusetts was searching for a young and energetic coach to instill some energy in their program. Based on which camp you believe ( Calipari or Pitino), Pitino called UMass and advised them to hire Calipari. UMass reportedly interviewed Cal and offered him the job, but the financial package wasn’t appropriate in Cal’s eyes. That’s when, according to the Pitino camp, Coach P offered to donate the bonus money to UMass needed to bring Calipari onboard.

While Pitino has confirmed this scenario several times both publicly and privately, the Calipari camp says this is not true and resents Pitino’s taking credit for something that supposedly never happened. Sports Illustrated magazine did a story on the Calipari-Pitino relationship several years ago. In that story, the UMass athletics director denied that Pitino ever gave his school any money to help in the hiring of Calipari. Calipari carries that with him still to this day when he goes into battle with Pitino. Cal feels like he earned his own way up the coaching ladder and into the UMass job.

If the above mentioned isn’t enough to stir the pot, let’s not forget Coach Cal sweeping in at the last minute and stealing Marquis Teague away from Louisville and Pitino late in the recruiting season last year.

Calipari is a master at coddling today’s massive ego-driven teenage mindset, yet when he gets them on campus he transforms their NBA desires into a team chemistry that drives them deep into March. The story goes that while having a phone conversation with Marquis Teague during the recruiting process just before a big tournament in Las Vegas, Cal asked Teague why he reopened his recruiting and more importantly why he was considering UK. Teague replied,

The Vegas tourney began the following weekend. Most NCAA coaches travel from the airport to the gyms and hotels in a rental car or a taxi. When Teague and his AAU teammates showed up at the players entrance to the Vegas gym, all the NCAA coaches started arriving in yellow cabs and rental cars. Then all of a sudden a limousine shows up at the entrance, and as the players all turn their heads out stepped Kenny Payne, Orlando Antigua, and Calipari.

Now you know the rest of the story — and who’s playing point guard for UK this Saturday.

I could go on and on, but space and time won’t permit. If this doesn’t set the scene for the emotions between the two programs then you don’t have a ticker, because mine is beating as hard and as quick as it has since this time a year ago.

I just hope and pray that everyone’s emotions are under control during the game. I fear that if Cal and Pitino don’t bury the hatchet publicly, it’s going to come to an ugly head someday. I sure hope it’s not similar to the Cincinnati-Xavier debacle.

Columnist Ira D. Combs lives at Jeff in Perry County where he operates Tri-State Sports with his brother Harold.