Will exports save coal?

‘Some of this is just capitalism at work.’ 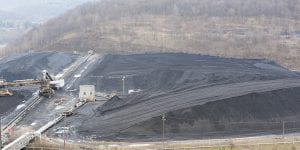 A mound of coal that will be used to power the Bruce Mansfield Power Station is seen in Shippingport, Pa. (AP Photo/Pittsburgh Tribune-Review, Philip G. Pavely)

Signs of an industry downturn and other factors threatening to take a toll on coal make this a worrisome time for miners and companies employing them.

Furnaces and factories are running less often because of a record-breaking warm winter and still-stagnant economy. Cheap natural gas is gaining on coal’s lead as a fuel for generating electricity.

Federal air-pollution rules that take effect in three years are triggering early retirements of older coal-fired power plants, instead of upgrades to curb emissions. Tougher regulations are sure to follow a 2010 explosion at a mine in West Virginia that killed 29 miners.

“Coal producers are generally thinking this is going to be a rough year,” said Thomas Hoffman, an Upper St. Clair, Pa., energy communications consultant. “There is a lot of discussion in the industry about the degree to which higher coal exports can offset some of the expected domestic decline because of mild weather, lowpriced natural gas and shutdowns of some coal-fired power plants.”

Producers export about 10 percent of American-mined coal, primarily higher-grade metallurgical product that sells for $200 or more per short ton, he said. Metallurgical coal, known as coking coal, generally is higher in carbon content and lower in moisture than thermal, or steam, coal used to generate electricity.

The outlook for the industry worries some miners, said Phil Smith, a spokesman for United Mine Workers of America.

“They see that the companies are cutting back in terms of production, which is obviously going to have an impact on them,” Smith said, pointing to recent idlings at two Consol Energy Inc. mines in West Virginia and in southwest Virginia. “No one has been laid off yet, but what has happened is the opportunity for overtime has shrunk or gone away. The opportunity for new hiring is a lot less than it was before.”

No. 2 mine in West Virginia because of a weaker market for thermal coal, and at its Buchanan Mine in southwest Virginia on lower demand for metallurgical coal.

Even so, Cecil, Pa.-based Consol takes a broader view.

“If you look at coal worldwide, demand is growing quite a bit,” said Dan Zajdel, vice president of investor relations.

Last year, Consol shipped a record 11.4 million tons of coal overseas, up 68 percent from 2010. Those sales accounted for just over $1 billion of the company’s $5.7 billion in revenue last year, and about 28 percent of total production. This year, the company expects slightly lower or flat exports of 9 million to 11 million tons, with growth coming later.

The Buchanan Mine idling followed pressure by some customers, amid a recent slowdown in Chinese steel production, for Consol to sell its metallurgical coal well below a benchmark price. “We were not willing to discount,” Zajdel said.

The Blacksville mine faced a different issue. “Because the weather is so unusually warm, we are getting to the point where customers physically can’t take any more coal” because they lack storage space, he said. Consol anticipates deliveries to power plants will pick up this spring.

Coal’s share of U.S. power generation dipped below 40 percent in November and December for the first time since 1978. Regulatory changes could cut demand by 42 million tons industry-wide.

Coal producers, meanwhile, face more frequent inspections and other federal mandates in the aftermath of the worst coalmining disaster in 40 years.

West Virginia Gov. Earl Ray Tomblin signed legislation recently that strengthens that state’s mine safety laws. In Congress, three bills with tougher rules are pending, including one written with help from the Mine Safety and Health Administration.

Somerset, Pa.-based PBS Coal Inc. is increasing its focus on metallurgical coal, which makes up 80 percent of its production, spokesman Hank Parke said.

“(Metallurgical) coal is higher quality and brings more at market, and so it’s more cost-effective to mine,” he said.

PBS, with coal reserves in several Pennsylvania counties, employs about 1,000 people, more than double the number from seven years ago, Parke said. The company mined 7 million tons last year, exporting about half.

“Manufacturers benefit and so does every citizen who has heat and buys electricity, and that’s ultimately good for coal pricing and power generation,” Barker said. “Some of this is just capitalism at work. You just have to ride the wave. There was an upswing in coal from 2004 to 2011, for the most part.”

Rosebud operates 15 mines and six coal preparation plants in Pennsylvania and Ohio, with about 1,300 employees. Barker declined to discuss production.