Will it frost in May? 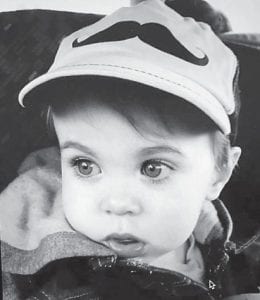 Christian Gray, great-grandson of southern Ohio correspondent Rose Ballard, will turn two March 20. He is the son of Katie and Jamie Gray, and his grandparents are Kay and Clarence Gray.

Hello again from the flatlands! We are having a streak of crazy weather. In the teens with two inches of snow one day, the next day in the 50s. Oh well, spring can’t be too far away.

We have been having thunderstorms and high winds in this area. Have you ever heard the old saying, if it thunders in February, it will frost in May? We had thunder on Feb. 8, and a couple other times also. Does that mean it will frost on those days in May?

This morning I noticed it is getting daylight just a little bit early. Oh what do I know? It might have been the moo.

I am still reveling in the memories of my unplanned trip to the mountains last weekend. I think I need a standing reservation at Whitesburg Motel, except I never know when the notion will strike me, and I am on my way back to the old home.

I wish I wasn’t afraid to drive my van that far. I would have it made as my back seat lets down for a comfortable bed. The van is really too large for me, as it is a three-quarter size, wider than most. Oh well, I have enjoyed using it until this past year when I’ve been too sick

Once again I have been asked the question, if I am so sick how do I get out and go? I keep on going, simply because if I give up I may as well lie down, fold my hands, close my eyes and hold my breath until I am dead.

As long as the medicine is helping me digest a little food or liquids and God gives me the strength, I will continue driving to where I feel I can.

I know I push myself far beyond my limits. There are times I am so nauseated, plus my stomach is burning so bad it feels like I have fire in my inside, but so what? I have a fire burning in my heart and soul for music and the mountains, so away I go when I can afford it.

If I wanted to be a moocher, there are so many who have invited me to stay with them. I am such a restless sleeper that I really prefer Whitesburg Motel.

Several years ago while my ex-husband and I were at homecoming in Tennessee, we stayed at Super 8 Motel in Careyville, Tenn. I was so restless, I wanted to get up and move around knowing I couldn’t because I didn’t want to disturb him. I finally couldn’t take it anymore. I took the extra pillows off the bed and placed them in the bathtub, took my paper and pen, and a book, and climbed in the bathtub.

I was writing when there was a knock on the door, and my husband had to use the bathroom. He couldn’t believe what he saw when I opened the door to step out of the bathroom

Another time two friends and I went to the Smokies for a weekend. We had a suite and I was awake in the middle of the night. I took a chair in the bathroom to sit in, propped my feet on the commode and wrote for a couple of hours.

So now you know how weird I am. When I wake up I have to get up, but I don’t want to disturb anyone.

I may just change my mind and take Mike and Marcia Caudill up on their invitation this summer as she has a balcony upstairs. I would love to be sitting there when the dawn comes peeking through.

Ricky Caudill lives in my idea of paradise, where no one to disturb your peace and quiet.

Where I live is as close to Heaven as I will ever be as I do have some open space to enjoy. I love being with people, yet I love open space too. I wouldn’t survive in a big city.

A friend gave me a book, Hillbilly Elegy, and I love it. It’s written by J.D. Vance. It is a really good read, and I can relate to this book, It has been quite a while since I have taken the time to pick a book up and actually read.

Last weekend when I was in the mountains, while Ricky Caudill and I were visiting Mike and Marcia Caudill, Hillbilly Elegy was laying on a table and then someone else had it also.

I’ve even branched out on the computer, as I tuned in WXKQ The Bulldog 103.9 Whitesburg, to enjoy Kevin Day and his son. This isn’t my usual bluegrass music, but it is good listening to them. Larry seems like such a wonderful dad. I admire anyone that gives his or her time to radio, paid or otherwise. I was a volunteer DJ for two summers on WAIFM in Cincinnati during 1994 and ’95. My program was called Morning Sunshine.

Kevin is the son of Doyle and Merlene Day. I remember Merlene Davis Day from Mill Branch, and I slightly remember Doyle Day.

I missed my cousin Jack Adams show last Friday night, as I was in the mountains. Jack has a bluegrass show on Wednesday at 8 p.m., and Sunday at 10 a.m. You can get in touch with Jack Adams on Facebook.

Sunday was Old Time Fiddlers, and we had such a great turnout. I know what the definition of the word amazing really means. I was in what can be described as Seventh Heaven.

There were several new people, Beverly Halcomb and her daughter Lacy from Hamilton. Bev is the daughter Bill and Mary Halcomb, and Mary is the daughter of my little mountain mama Alma Whitaker from Roxana. Alma has been gone several years, but she still lives on through her children and my memories.

Trina Emig, who is the banjo picker for Ma Crow and the Lady Slippers, stopped by. I was so thrilled to have Trina there as this was her first visit.

I made a large crockpot of navy bean soup, and thanks to Ricky Caudill, there wasn’t half a pint left to bring home. Someone was supposed to bring cornbread, but they forgot it.

After my trip to eastern Kentucky, on Monday morning as I turned my electric stove on, it decided it was tired so it died. Really I could live without a stove, as I can’t digest food, so I can use my microwave or crockpot to heat what I need to survive.

Just not having a stove bothered me until Saturday, when my daughter Kay and her husband Clarence Gray got me a new stove. So you might say that Valentine’s Day came early.

I finally talked to Doyle and Betty Ison, and they are perking along.

Bessie Shepherd, I am sorry to hear you haven’t been feeling good. We need to get together when I come back home.

Ricky Caudill, Valerie, Beau, and Monica, all enjoyed a night out at Street- Side Cafe in Whitesburg. It was an early Valentine’s gift to Ricky. Well, he sure is popular as Mart and Sue Hall treated Ricky and me to an early Valentine supper at Ponderosa last Saturday night, along with dessert.

Now Ricky may be wondering what the Easter Bunny going to bring him. Oh! Do you get gifts on St. Patrick’s Day? I believe there’s something called the Blarney Stone.

Just teasing with you, Ricky, it is great hanging with you. Thank you being my chauffeur.

That old clock is creeping upon me, and I’ve got an appointment to get an oil change.