Will menopause? shrink a fibroid? 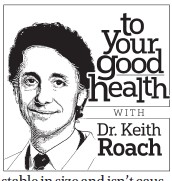 DEAR DR. ROACH: I am 50 years old. In the past three months there have been indicators that I am perimenopausal. I have a very large fibroid. It is described as “six months” in size. I am not a candidate for embolization. I presently have no painful symptoms, and, with iron therapy, I am no longer anemic.

Doctors have recommended a hysterectomy. However, I am reluctant, as I am so close to menopause and believe the tumor should shrink. What are the risks of not removing this large fibroid? I am aware this surgery is common; however, I have profound concern about the risk of blood loss. — L.L.

ANSWER: A fibroid, also called a leiomyoma, is a (usually) benign tumor of the uterus. Fibroids may cause symptoms of bleeding, pain or pressure, or may have no symptoms at all. Gynecologists describe the size of the uterus with its fibroid as the equivalent of a pregnant uterus, so “six months” is a large fibroid indeed. Gynecologists will follow the size of the fibroid by exam or ultrasound in order to show that it is stable. A growing fibroid is suspicious for a sarcoma, a malignant tumor that 1 percent to 2 percent of fibroids transform into.

Because fibroids respond to hormones, they indeed tend to stabilize or shrink at menopause, when female hormone production decreases. If the fibroid is stable in size and isn’t causing symptoms, then there is no need to have surgery. You can see what happens to the fibroid with time.

DEAR DR. ROACH: How long do shin splints last? Is there anything besides ice that will make them go away faster? My left shin started hurting a little more than three weeks ago, and I ran once or twice on it, then I stopped, but it still hurts. Is this normal? When do you think I can run on it? I don’t think it was increasing my distance that did it, but I did a longer run on a flat path that I normally do with hills, so I thought maybe that was the problem — but three weeks seems like too long. — H.O.

ANSWER: Pain in the shin bone (tibia) is common in runners, but the hard part is distinguishing between “shin splints,” properly called “ medial tibial stress syndrome,” and a stress fracture of the tibia. A stress fracture usually has a discrete area of tenderness, but MTSS has more diffuse tenderness. An X-ray may be needed to be sure it isn’t a stress fracture, since the treatment differs.