Will NASCAR draw a line? 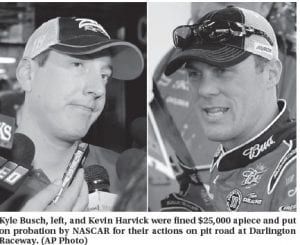 The marketing department at Charlotte Motor Speedway wasted no time in trying to capitalize on the feud between Kyle Busch and Kevin Harvick, celebrating the drivers’ spat in an advertisement for Saturday night’s All-Star race.

The digital ad went viral two days after Busch and Harvick tangled post-race at Darlington. It features the image of Harvick trying to punch Busch through his open window as Busch uses his car to nudge Harvick’s empty car out of the way.

“It Gets Settled,” screams the ad in bold yellow letters, “In The Race For $1 Million.”

Truth in advertising? Probably not.

NASCAR fined both Busch and Harvick $25,000 each, and placed them on probation through June 15. The two were also summoned to meet with NASCAR officials at Dover last week, and it was explained to the drivers that their actions on pit road at Darlington were dangerous and outside the limits of the relaxed “Boys, have at it” mentality.

CMS officials launched the ad before the NASCAR penalties were handed down, but make no apologies for the mixed message being sent to race fans. On one side is NASCAR saying Busch and Harvick went too far, and on the other is a race promoter hopeful that the drama can drum up interest in his event.

“It’s the hot story of the day and it’s exciting and dramatic to have a fight on pit road or the frontstretch,” CMS president Marcus Smith said. “It’s current news and it helps to attract some attention to the event. That, along with great racing all year long, has helped with ticket sales.”

CMS has been feasting on NASCAR’s decision to give drivers leeway in settling their own scores, and it’s primary television ad for the All-Star race has been a “Wild West” themed commercial with NASCAR President Mike Helton in a cameo role. It’s the correct marketing strategy for an event that’s typically billed as a no-holds barred dash for cash.

With no points on the line Saturday night, drivers are expected to stop at nothing in pursuit of the $1 million prize. It’s created a bit of lore about the race, as tempers have gotten the better of many a driver.

Busch has been at the center of two of the most recent clashes: in 2007, when he wrecked with older brother, Kurt, and the two didn’t speak again until their grandmother brokered a Thanksgiving truce, and last season, when a wreck with teammate Denny Hamlin led Busch to declare on his radio, “I swear to God, I am going to kill Denny Hamlin.”

Although Busch and Harvick made clear last week at Dover they do not like each other one bit — and the meeting with NASCAR moved them no closer to seeing eye-to-eye on the events at Darlington — it’s unlikely that they’ll make good on CMS’s claim to settle their dispute on Saturday night. Although probation doesn’t have a clear definition in NASCAR, the drivers have likely been told to stay away from each other on and off the track for the next month.

Smith hopes that’s not the case.

“I heard all the drivers say and read what they say, that this probation and fine is not going to change the way they drive,” he said. “I think that’s fantastic. That penalty, although it was somewhat costly, the probation is the equivalent of a slap on the wrist and I sure hope it doesn’t make a difference in the way they compete.”

And, taking it a step further, Smith even encouraged more fisticuffs Saturday night.

“If any of these guys get fined for fighting at the All-Star race, we’ll pay the fine,” he promised.

That’s probably not what NASCAR wants to hear as series offi- cials walk the fine line of disciplining drivers for the very behavior that draws attention to the sport. Figuring out what is and isn’t allowed has become anyone’s guess, which led two-time champion Tony Stewart to call on NASCAR for clarification of the “Boys, have at it” policy.

“I’ve been driving in this series for 13 years and I don’t know what is acceptable and what’s not and what’s the penalty,” Stewart said last week. “I am trying to figure out what the goal of it was, what they’re trying to accomplish by saying have at it, and with that, what does it mean?

Smith wants it handled at his race track Saturday night because it would both enhance the legend of the All-Star race, and boost ticket sales for the May 29 Coca- Cola 600 at CMS.

But NASCAR apparently isn’t so sure what it wants, and that indecision will most certainly keep Busch and Harvick in check Saturday night.