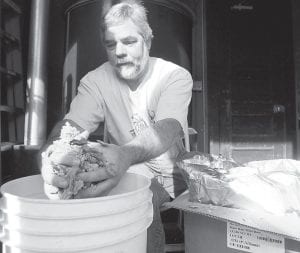 Roseburg Station Pub and Brewery head brewer Tom Johnson measures out hops at the brewery in Roseburg, Ore. When Tom Johnson starting brewing beer on the kitchen stove at his Eugene home in the ‘80s, the University of Oregon finance major never thought he would end up working for one of the top craft breweries in the United States. (AP Photo)

With their products, he means.

“We encourage beer drinkers to check out their competitors’ beers,” said Sam Calagione, founder of the Dogfish Head Brewery in Delaware, as he sat at a restaurant table with a nearly drained pint of a Brooklyn-made lager in front of him.

Discovery is hoping that the same public food fascination that “Cake Boss” and similar series have tapped into will spill over into the craft brewing industry. Its “Brew Masters” series premiered Nov. 21 and will continue to air Sundays at 10 p.m.

Craft brewing is a growth industry in the United States, its existence something of a “back to the future” development for an industry dominated for many years by local brewers before ubiquitous brands like Budweiser took over the market. Many beer drinkers try the small brands to support local companies, and it’s a recessionfriendly drink, Calagione said.

“Compared to world-class wines, a world-class beer has all the complexity and food-compatibility of wine at half the price,” he said.

The “brew master” was a college student in New York who worked as a bartender and became fascinated with the product. He went to the only store in Manhattan that sold home-brewing materials at the time and began making his own beer.

After an apprenticeship at a brewery in Portland, Maine, he started Dogfish Head in Delaware because that’s where his wife was from and it was one of only eight states without a small brewery.

Dogfish, which makes more than two dozen brands, specializes in re-creating beers thought lost to history, the recipes often uncovered through archaeological expeditions. Its Jiahu brand, which features rice and sake yeast, comes from a recipe in China that is 10,000 years old, he said.

A beverage needs water, yeast, hops and barley to fit the definition of beer. After that, the ingredients are wide open. Dogfish has used tomatoes, saff ron, mussels and many other foods in its beers.

It seems like an interesting place to work: Dogfish has a company-wide bocce tournament on Friday afternoons, the sport chosen in part because “you can play it competitively without putting your pint glass down,” Calagione said.

The series features some of Dogfish’s historical searches for beer recipes, and some of the ups and downs of the production process. One day, the beermaking stops because a metal tube from the assembly line is missing. The brewery has to choose between destroying cases of beer worth thousands of dollars or methodically searching, bottle for bottle, for one that has the metal rod.

“You don’t have to be a regular beer geek — and I use that as a term of endearment — to want to watch this show,” Calagione said.