By TOM LOFTUS
The Courier-Journal 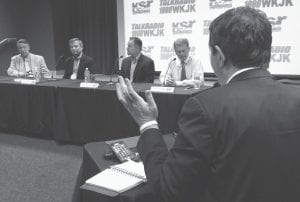 Kentucky Sports Radio host Matt Jones questioned Will T. Scott (far left) and the three other Republican candidates for governor during a live broadcast of his show in Louisville last week. The others (from left) are Hal Heiner, Matt Bevin and James Comer. (AP)

In her autobiography “A Trail of Feathers,” Tracey Damron gives spiritual explanations for many eventful turns in a life that led her inside the world of Kentucky Republican politics. But her explanation for the breakup of a seven-year marriage to Will T. Scott is an earthly one.

“I loved dressing up and going to fancy dinners,” she wrote. “Will T. loved Spam and wearing old clothes when he wasn’t campaigning.”

Will T. Scott — lawyer, Vietnam veteran, former Kentucky Supreme Court justice and frequent political candidate — is campaigning now for the GOP nomination for governor as the unpretentious representative of the average Kentuckian.

He has trailed in the polls. He’s struggled to raise money. (A month before the election he’d raised $212,000, but $137,000 of that was his own money loaned to the campaign.) Wealthier opponents Louisville businessmen Hal Heiner and Matt Bevin have given millions of their own to pay for expensive television ads, while Agriculture Commissioner James Comer has raised $2 million in donations.

“I’ve been dismissed all my life as a longshot,” Scott said. “… But the lunch pail Republican army of working men and women are going to push me across the top of this mountain. I feel certain of that.”

He’s resorted to stunts for free media attention, such as parachuting (at age 67) to draw attention to his platform for veterans and taking a pie in the face to benefit an early-reading program.

And he says his base of support in Eastern Kentucky is growing as the frontrunners attack each other in debates and campaign ads.

“As everybody else falls, I rise. Jamie (Comer) has already fallen. Hal (Heiner) is falling now,” Scott said. “I occupy the center of the party. I believe the voters will come to me.”

His trailing position in the polls and positive campaign style come as a surprise to Ned Pillersdorf, whose wife Janet Stumbo lost campaigns in 2004 and 2012 to Scott for justice of the Kentucky Supreme Court.

“The campaigns he ran against Janet received national attention for their aggressive, negative nature,” Pillersdorf said. “He’s a diabolical, and effective, campaigner. Do not underestimate his ability to come from behind.”

Scott was raised in Pike County and still lives there, according to his campaign biography, “in a log cabin at the head of Miller’s Creek … with all his critters.”

He was married four times and divorced four times. He says he still loves his ex-wives, and one of them, Damron, is campaigning for him.

After graduating from Pikeville High School in 1965, he went off to study pre-med at Eastern Kentucky University.

But at the start of his sophomore year, after a night of partying in Richmond, Scott said he and two friends talked themselves into enlisting in the Army.

“We all just realized we were starting back downhill. We were wasting our time and our families’ money,” Scott said. “We decided to join the Army. We figured that’s what John Wayne would do.”

Scott served three years in the Army, including a year in Vietnam, where he won decorations including a Bronze Star.

While in the service he gave up his interest in medicine and turned to law. And when he returned to Eastern Kentucky, he got a bachelor’s degree from Pikeville College, then went on to the University of Miami (Fla.) for a law degree and a master’s in tax law.

In 1976 he started practicing law in Pikeville and worked as a public defender. Later he prosecuted cases as an assistant commonwealth’s attorney and in 1983 was elected Pike circuit judge, a post he held through 1988, when he resigned to run for Congress.

In both 1988 and 1990 he lost campaigns against Democrat Chris Perkins for Congress. In 1995 he lost a race for attorney general to Democrat Ben Chandler.

His electoral record rebounded, however, winning election over Stumbo in 2004 and again in 2012 to the Kentucky Supreme Court.

In an interview, Scott pointed to two cases he said reflect his best work on the bench.

One was a land and mining rights case that had been pending for 20 years when he assumed the Pike circuit bench and pitted a local landowner against a subsidiary of Bethlehem Steel. In what the Wall Street Journal later reported was the first time a Kentucky judge held a coal company liable for willful trespass in a coal title case, Scott found that the mining giant had lied and ordered it to pay nearly $17 million in damages.

And as a Supreme Court justice, he cited a worker’s compensation case where he wrote the majority opinion in a 5-2 ruling that struck down a higher standard for coal miners than other workers to prove impairment of the lungs.

Stan Billingsley, a retired circuit judge and publisher of the online legal research database LawReader.com, said, “When he came on the Supreme Court, I took the attitude that here is a conservative Republican who will probably rule conservatively on everything. But as a practical matter, he built a record of very fair, very even and non-partisan rulings. … He’s unpredictable.”

But Justice Scott faced criticism when his son, who worked for the Administrative Office of the Courts, won a promotion and when a local Pike County committee decided to build the new Pike County courthouse in a location that required the purchase of a building Scott owned.

And in his bitter reelection campaign of 2012 against Stumbo, the Judicial Campaign Conduct Committee found that a television ad Scott ran was false and misleading and appeared to be “designed to appeal to racial prejudice.” The ad alternated photos of black convicted criminals from cases mentioned in the ad with those of pregnant white women who were not involved in the cases.

Scott said he had nothing to do with his son’s promotion or the selection of the site for the courthouse. He said he did not want to sell his property, and did not contest the price he was offered for it through condemnation proceedings.

And he rejected the finding that his 2012 ad was false or intended to appeal to predjudice. “Had nothing to do with color, it had a lot to do with the facts of those cases,” which he said best illustrated differences between himself and Stumbo.

Like most of his opponents in his current race, Scott has offered plans to lower taxes, shrink government, institute charter schools and promote the coal industry.

But he distinguishes himself by promising to push for a real funding source to address the $30 billion in unfunded liabilities of Kentucky’s public pension systems — casinos.

Scott said he will push for a constitutional amendment allowing six casino licenses at locations where people already bet on horse races. The casinos, he said, will generate $400 million to $450 million a year — money he says is already being wagered by Kentuckians now at out-of-state casinos.

And the new revenue will be dedicated for Kentucky’s pension systems.

Gov. Steve Beshear was first elected governor in 2007 on a pledge to resolve the state revenue shortages with casino revenues. But Beshear’s efforts to gain legislative approval failed.

As a Republican leading the push, Scott said he would be in a better position than Beshear, a Democrat, to win a conservative legislature’s approval. Also, he said, the pension funding crisis has grown so severe lawmakers will realize casinos are a better idea than raising taxes.

“I’m solving the pension problem,” Scott said. “I know I can do it with an unpopular thing — gaming. I’m the only one not afraid to lose, so I can be honest and say, ‘Here’s how you do it.’ “