Will UK fans return even if they start to win games? 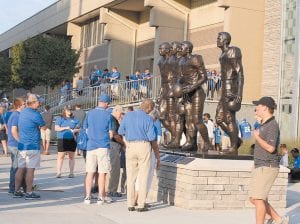 Kentucky football fans have been some of the most loyal fans in the country. Not saying it is easy to be a Kentucky basketball fan, but it is. The basketball team wins and competes for national championships. The football team … well losing seasons are far too common.

Many fans failed to renew their season tickets this year. Many are already indicating that barring a miraculous finish to the season, they will join the non-renew group next year.

Carter Wasson is a typical UK football fan — except he did have a Wildcat with a football tattooed on his leg if you wonder just how much he loves UK football.

But he gave up his tickets this year primarily for financial reasons.

“Just using rough numbers, I spent at least $40,000 across 25 years of season tickets, K-Fund donations and costs associated with attendance at probably more than 150 games. In reality, it’s most likely closer to $50,000 if I count pay per view and more than a few years of purchasing someone else’s tickets at the beginning of every season,” Wasson said. 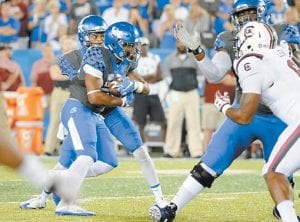 “For a quarter of a century, this choice always came at the expense of something else in that year’s budget. The product on the field is still sub-standard and I can’t justify rewarding poor performance by throwing good money after bad.”

Worse yet for UK, Wasson doesn’t see a scenario where he would ever buy season tickets again, even with UK’s win over South Carolina Saturday that kept alive hopes UK might reach a bowl game this season.

“It took decades of continual upgrades to earn the seats I just gave up. I see no good reason to start that process all over again. I am, however, blue to the bone and will always pull for the Cats, so I can see going to the occasional game,” he said.

He’s been frustrated by Coach Mark Stoops and his staff not having the understanding of the players’ “capacity” to understand their roles and lack of development in highly-rated recruits. 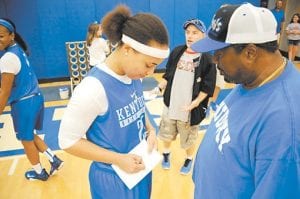 “I have always been and will always be a Wildcat football fan. That will never change. I am just weary of all the talk and no walk.”

So is Kim Gaines, another longtime Kentucky fan.

“My dad has bought our family season tickets for over 20 years. After rising K-Fund donations, having to re-select seats after sitting with same folks for years — and let’s not leave out disappointing outcomes over and over — he let them go this year,” Gaines said.

“I have always stayed and supported win or lose ’til the bitter end until this year. Something has to give.” 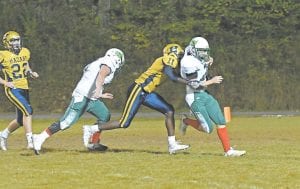 Zachary Isaac shook off the Hazard defense with the help of teammate Tyler Gibson. (Photo by Chris Anderson)

It does. Fans are disgruntled with more than the product Mark Stoops has put on the field. Many are still bitter over being forced to move to different seat locations when Commonwealth Stadium was renovated last year and those who made the biggest donations got first choice on tickets.

Wayne Kinsel thought not giving season ticket holders for over 25 years the chance to retain the same seats was “just plain wrong and if you want loyalty, you should show loyalty to those fans.”

Many more are upset over the higher parking costs — and also being forced to move to parking lots not as convenient to the stadium as where they had parked for years for a higher price.

Could winning cure all this? Maybe. But it’s going to take a lot of winning even with the South Carolina victory, and even then I’m not sure those fans who were so loyal for so many years are ever going to be as supportive as they once were.

Freshman running back Benny Snell of Ohio has been a major reason Kentucky has won its last two games. He has rushed for five touchdowns and his power has been a perfect match with Boom Williams’s speed.

Now he gets a chance to see what he can do at No. 1 Alabama this week, and he can’t wait.

“It was kind of what I dreamed about growing up,” he said. “Coming up, Alabama was always a real special team. So why not try to play against the best and see what you have. This was an up and coming program and I wanted to be part of that. Now we get to play Alabama and see where we are.”

Snell went to a game at Alabama as a junior.

“It’s a nice environment, but not better than Commonwealth (Stadium),” Snell said.

Not sure I buy that, but I like a true freshman who understands the importance of letting UK fans know he appreciates them.

“Alabama always plays hard, they play as a unit. But even a good team can lose at any time. Anything can go wrong for them, so we will just see what happens,” Snell said.

Preseason honors have already started rolling in for Kentucky senior Makayla Epps as she was named Athlon Sports Preseason All-American Second team after averaging 17.1 points, 4.8 rebounds and 4.5 assists per game last year when she hit 47.3 percent from the field. She scored 20 or more points 12 times and hit double figures in 29 of 32 games. She also had only the second triple-double in program history.

“For me, in order to be successful you have to have a big three that you can go to. You have Epps running the show at the point and then you have Maci knocking down those outside shots. Then you have Evelyn inside, so you have the basics right off the bat for a successful team,” Dunn said.

“Epps and Morris are what I call typical, tough Kentucky kids that love the game, love to compete, can’t stand to lose. I think they have really flourished here. Epps has maybe had some bumps in the road and Matthew (Mitchell) has been great for her. I think Maci has the potential to be one of the great all-time shooters in history of Kentucky women’s basketball. Both of them are in the right place at the right time.”

Former Kentucky commit Russ Yeast apparently had a terrific visit to Louisville when the Cardinals thrashed Florida State, and it would not surprise me at all to see him sign there in February.

His father, former UK standout Craig Yeast of Harrodsburg, almost went to Louisville before opting for Kentucky and getting to play with Tim Couch.

Russ Yeast, a receiver/ cornerback, has also visited Auburn and Iowa. His list of scholarship offers includes Alabama, Mississippi, Purdue, Maryland and others.

Russ Yeast was one of the early commits to UK that de-committed after Florida quarterback Mac Jones did the same well before the season started. He has numerous family members living in the Harrodsburg area and his late aunt ran track at Louisville.

Freshman offensive tackle Landon Young was a three-sport standout at Lafayette. He helped Lafayette reach the state football championship game, won a state title in wrestling, and won state titles in track in the shot put and discus. He also verbally committed to UK before his sophomore season and was the first freshman ever offered a scholarship by coach Mark Stoops.

So I asked Stoops if he envisioned all those years ago that Young would be a starter his freshman season at UK?

“I don’t think it works out that way. We’d have a lot more wins if I could see it all that clear. Sometimes it works out that way, sometimes it doesn’t, but you certainly saw the great length that he had and the frame to put on weight and you knew that would come,” Stoops said. “And he was very athletic for a tall, rangy guy at that point.

“Again, you just see him getting better and better each and every day, better each and every year. Through the recruiting process you don’t see him all the time like you see him now, but we saw him quite a bit because he was right down the road. It seemed every couple months, every three or four months, whatever it was, you just noticed it, like, ‘Wow, he’s getting a lot bigger.’

“In every sport that he participated in he got better, whether it was throwing the shot, disc, wrestling, football, anything. He’s a worker. Love his mentality.”

Stoops took his team to the ceremony and thinks it left a lasting impression on his players that helped the team beat South Carolina.

“I think it did. I really do. I think that was very important for us, the courage of those guys and what they have done. Knowing the difference between right and wrong and that those guys really made a stand, a difference and had an impact on a lot of people’s lives,” Stoops said.

Every fan should not only thank them for what they did, but also for their patience with UK basically ignoring what they did until just recently. Why it took almost 50 years to recognize these men — after all, how long did it take to blast UK basketball coach Adolph Rupp and his team that lost the 1966 national title game to Texas Western — is beyond my comprehension.

That’s why it was so nice to see fans making sure they viewed the statue before Kentucky played South Carolina. One of those fans called a radio show I’m on each Sunday morning in Lexington and noted that Hackett, the first African- American captain of a SEC team, was his team leader at Toyota in Georgetown.

“What a class person he is,” the caller said. “He is genuine, very easy going. He’s so soft spoken and is just a great man. He earned that position as a team captain with his leadership on and off the field at Kentucky.”