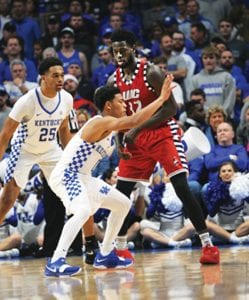 Quade Green has shown he can make shots, now radio analyst Mike Pratt says he has to learn how to use the right angles on defense like he tried to do against Illinois-Chicago Sunday. (Jeff Houchin Photo)

Kentucky’s play was so bad in last week’s 44-17 loss to Louisville that there is little to say other than the Cats definitely now will play either in the Music City Bowl Dec. 29th in Nashville or the Liberty Bowl Dec. 30th in Memphis. How many fans go to the bowl game after the way UK ended the season against Georgia and Louisville remains to be seen.

But the one thing to remember from the game is that sophomore Benny Snell continued his late season surge by running for a career-high 211 yards to finish the regular season as the SEC’s top rusher with 1,318 yards — the first UK player to do that since Artose Pinner in 2002. He had 32 more yards than Auburn’s Kerryon Johnson.

Snell became just the sixth UK player ever to rush for 200 or more yards in one game.

In UK’s last five games, Snell ran for 777 yards and 12 scores on 123 carries. He also led the SEC in rushing touchdown with 18, which is also a new UK singleseason record. He now has 2,409 yards in two years to rank eighth on UK’s all-time rushing lists and has a career-best 31 rushing touchdowns. 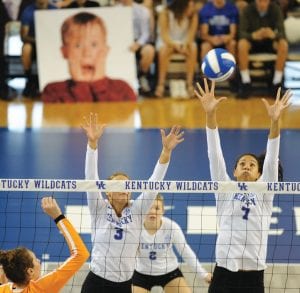 One reason Kaz Brown, right, knew about Kentucky was because she was a John Wall fan. (Vicky Graff Photo)

“Benny is a guy that’s also very emotional and plays so tough. That does get lost sometimes when you take a beating like that,” Kentucky coach Mark Stopps said after the Louisville butt-whipping. “I really appreciate Benny and the tough yards that he runs for.”

He should, because this UK team is lacking in players that play with the heart Snell does no matter what the score is.

“Benny is an incredible back. I mean, he’s just phenomenal. The way he runs, he’s so passionate with all of it,” quarterback Stephen Johnson said.

Snell even made a believer of Louisville coach Bobby Petrino.

“He’s a really a good running back. He’s physical, he’s got a great balance. It took a lot of guys to hit him and tackle him,” Petrino said.

Persuading Matt Elam to sign with Kentucky rather than going to Alabama was the biggest recruiting battle Mark Stoops won when he first came to Kentucky. However, Elam went from a four-star, can’t miss prospect to a third team nose guard his senior year at UK.

His best year was 2015 when he had a combined 23 tackles after making only 10 as a true freshman. But in 2016 his playing time dropped significantly and he had just 10 tackles and that total dropped to eight this year. That’s 51 tackles in four years for a player Alabama wanted.

Stoops would not discuss if he wishes he had done anything different with Elam during his four-year career.

“I don’t want to get into the ‘what ifs’ with that,” Stoops said. “You know, it is what it is. Anytime anybody didn’t reach their goals, as a coach you always wish you could do as much as you can for any individual.”

Former UK receiver Jeff Piecoro, now the analyst for the UK Radio Network, knows “classic underachiever” has been used to describe Elam. He also knows many thought Elam would be the next Reggie White — a former NFL star — when he came to UK.

“I can’t say what I want to say. It’s not fair to the kid. Matt had a rude awakening in the SEC. We expect so much from some of these players,” Piecoro said. “With Matt so much was put on his shoulders when he chose Kentucky over Alabama. There was almost no way to live up to the hype and then we got what we got. But what could of, should of will always be talked about more than here’s what we got.”

Before Kentucky’s basketball season started, former UK All- American Mike Pratt had a warning — or bit of advice — for fans about the team’s point guard play.

“So much is about confidence. That’s why some guys develop slower than others,” said Pratt, the analyst for the UK Radio Network. “If you look at (John) Calipari point guards, John Wall started slow and you could see his confidence build.

“On the championship team, do we remember how Cal moaned about (Marquis) Teague and him not getting it done. About the first of the year, he relaxed and got it and became a quality point guard. The (Harrison) twins started slow and at end of the season UK went to the Final Four.”

Pratt went on then to say Quade Green reminded him of former UK point guard Tyler Ulis — who didn’t shoot well, struggled with his decision making at times and would leave his feet to make passes early in his freshman season.

Pratt pleaded then for UK fans to give Green the same “adjustment period” that other UK point guards needed.

“That will always be a critical position for Calipari. Don’t push the panic button if Green does not look like he is getting it done. He will develop with time. Just be patient,” Pratt said.

That was in early November and Pratt has turned out to be a prophet.

“Still not going to be John Wall, but I think he has a chance to be a good college point guard,” Pratt said after Sunday’s win. “He is now understanding a little bit more of where his shots come from and I think he is starting to understand who his teammates are as to where he should throw them the ball.

“He still makes some high school passes, but he is growing into it. Cal does not leave any margin for errors with his point guards and it puts a lot of pressure on you. But the kid is a tough little booger.

“I think he is about where I think he should have been. He got a little bit embarrassed against Kansas but they had experienced guards. I think he is growing. If he eliminates some casual passes, he is playing pretty good.”

The biggest concern seems to be on defense. Green doesn’t have the length of freshman Shai Gilgeous-Alexander or the quickness of former UK point guard Tyler Ulis, who now plays in the NBA. He has just one steal in seven games.

Pratt says Green will never be confused with former UK defensive stopper DeAndre Liggins but can be a solid defender if he learns how to use angles to his advantage.

“He is used to rushing right up on the ball handler from high school and being able to guard him. You have to take angles like a linebacker trying to tackle a running back that has turned the corner. If you don’t take the angle, he blows right by you,” Pratt said.

“If you go right at the guy with the ball at his present position like Quade has done, unless you can smother him with your size and quickness which he can’t … you have to figure out where this guy is going and when he makes his first move you have to make that angle cut. It’s all about the angles and you learn that from experience after getting beat a few times and they show you on tape. If you continue to grow, you become a much better defender and I think he’s going to be. Just keep being patient.”

Kaz Brown was a Kentucky basketball fan long before Kentucky volleyball coach Craig Skinner started recruiting her. Never mind that she lived in Waterloo, Iowa, she already knew plenty about Kentucky basketball when Skinner made contact — and that’s one reason she’s been part of 97 wins in four years at UK.

But how did she become a UK fan living in Iowa?

“My family is a big college basketball family. Both my parents played in college and my older brothers played,” she said. “I played (basketball) for a long time, too, so we were kind of a basketball household.”

But what about UK?

“When I did start getting recruited by Kentucky, it just kind of put that in my head. I started doing a little more research about the program and how successful consistently UK volleyball was. It just made me want to be a part of it even more.”

So if not for John Wall playing basketball at UK, would she not be at UK?

Brown just laughed before admitting she finally got to meet the current NBA star this year.

“I feel like it has all paid off. It was awesome. He (Wall) is kind of the big reason I started paying attention to Kentucky when I was younger and I’m here now,” Brown said.

Kentucky got a No. 4 overall seed in the NCAA Tournament and will host East Tennessee State Friday in Memorial Coliseum. A win would send UK against the Western Kentucky-Notre Dame winner on Saturday. If the Cats win both matches, they will get to host the regional semifinal and final the following weekend for the first time in school history.

Aspire is led by 6-11 Charles Bassey, one of the top five recruits in the 2019 recruiting class. He’s yet to narrow his list of college choices but don’t be surprised to see Western Kentucky in his top five.

Quote of the week: “I have never been told in 19 years of doing this by anyone at UK that I needed to back off what I was saying. I know how hard it is and what guys are trying to do, so I probably tend to be on their side because playing college football is not as easy as many fans think,” UK Radio Network football analyst Jeff Piecoro on being able to say what he wants on air.

Quote of the Week 2: “For him to go out that way, it’s difficult on him because he’s done an awful lot. He’s really represented us the right way, and he has had great character and really has been a leader and a very calming force for us, and I really appreciate it,” Mark Stoops on quarterback Stephen Johnson losing his final regular-season game.

Quote of the Week 3: “He is more committed than he has ever been in his life. Everybody has got to accept that he is still young now. He was 17 last year. Now he’s like 18. This kid is the age of a freshman, but I’m proud of him,” John Calipari on sophomore Sacha Killeya- Jones.