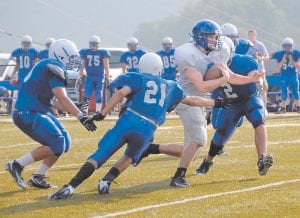 According to reports coming from UK’s Nutter training center, Michael Hartline, the 6’6″ junior from Canton, Ohio, has secured the starting spot at quarterback for the opening game against Miami of Ohio at Paul Brown Stadium in Cincinnati.

It’s also becoming glaringly apparent through comments by head coach Rich Brook that Hartline has begun to separate himself from the highly touted freshman duo of Morgan Newton and Ryan Mossakowski. Will Fidler, the 6’5″ junior from Madisonville, has been the only quarterback other than Hartline to receive any positive comments from Brooks or his offensive guru, Joker Phillips, since boot camp started on Cooper Drive earlier this month.

This development is not alarming to me or most people who cover UK football. However, until these impressive practice performances of Hartline’s are transferred from the practice field to the game field, he best keep a keen eye over his shoulder, because the young guns have all the talent needed to break onto the scene in the SEC.

There has been much talk in Big Blue Nation about UK’s lack of effort in recruiting one of the state’s premier running backs, Channing Fugate of Breathitt County.

I am on record many times as being a staunch Rich Brooks supporter. But let’s be honest, we all make mistakes, especially in evaluating young high school football players. Sometimes those mistakes are too late to be rectified.

According to a couple high school football coaches who will remain nameless, Brooks all but admitted this at a recent high school coaching clinic in Danville, where Brooks spoke in late July. Reportedly, Brooks was involved in a private conversation with a few of Kentucky’s more respected high school football coaches. When Fugate’s name came up Brooks simply told the coaches, “That one may come back to bite me.” Supposedly, when the UK staff first met to make decisions on offering scholarships after evaluating film the assistants wanted to offer Fugate one but Brooks nixed it thinking the Cats could get a quicker more athletic back.

Fugate reportedly has said on several occasions that UK’s staff showed very little interest in him during the spring and summer contact period when most scholarship offers are tendered for Division 1-A football prospects.

To be fair, it’s also my understanding the UK coaching staff still tried in vain to get Fugate on campus to one of their combine workouts in June for a final evaluation. The assistants were sure a scholarship would be forthcoming from Brooks after the boss viewed the workout, but Fugate didn’t show, for whatever the reason, and accepted a scholarship offer from Tennessee after a second visit and workout for the Vols’ staff.

Like all recruiting scenarios this is a question that will not be answered until the player has been in college for at least two to three years playing against SEC competition.

But I will say this: Brooks and his staff have drifted into a few other states and picked a plum or two off the trees. Let’s not forget what former UT coach Phil Fulmer thought of Tennessee natives Jeremy Jarmon and Randall Cobb when they came out of high school. They are two that UT let get away.

Tennessee made an effort to patch things up late in the recruiting period with Cobb but it was too little too late . UK could do the same with Fugate as we go through the fall season, but Brooks is well noted for not bugging a prospect after the player has committed unless the player shows a change of heart. Rumors out of Breathitt County indicate that the Fugate family is 100 percent into the Vols.

What really concerns me, and to a degree infuriates me, is I wonder what type of opinion would have been formed about Fugate by UK if his high school football career had taken place anywhere else besides eastern Kentucky.

That’s a battle I’ve been fighting for the athletes of the mountains for several decades now and it doesn’t look like I’m making any inroads.