Will we have a Red October? 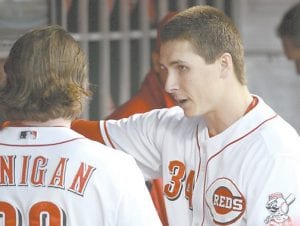 Cincinnati starting pitcher Homer Bailey (right) talked to catcher Ryan Hanigan during Tuesday’s game. Bailey gave up only one hit over seven innings, but it wasn’t enough to send the Reds to their third win in the NL Division Series, which was scheduled to resume Wednesday. (AP photo)

Our professional baseball neighbors to the immediate north, the Cincinnati Red Legs, are finally back in the hunt for another serious run at a World Series championship.

Many decades ago most eastern Kentucky baseball fans of all ages adopted the Cincinnati Reds as their favorite professional baseball team mainly for two reasons — simple geography and growing up listening to Wade Hoyt, Claude Sullivan, Al Michaels Marty Brennaman and “The Old Left-hander” Joe Nuxhall on the radio with their fathers or grandfathers.

I can’t put my finger on the exact day and time it all started, but in my eyes as a youngster during the Sixties there was something special about sitting out on the front or back porch on a warm but comfortable summer night listening to baseball on the radio. This may sound crazy to the present young generation, but I can honestly say as I look back that I enjoyed those evenings every bit as much as watching a game today on TV with the colorful technology and surround-sound that we experience. There was a certain mystery there when you could listen to but not see the action, and it made those few times you could afford to make that trek up north to see a game live that much more of a special experience.

The first time I ever laid eyes on Crosley Field as a 10-year-old in the summer of 1963 I thought the well manicured and plush green grass of Crosley Field had to be what heaven looked like. The Reds actually lost a double headr that day 12-4 and 13-5 to the same team they drew in the first round of the MLB playoffs. Willie Mays and Willie McCovey led the Giants back then, going a combined 14 for 22 on that day (McCovey 7 for 14; Mays 7 for 12) with each one hitting two home runs.

It didn’t matter to me. I was hooked on the Cincinnati Redlegs in particular and baseball in general. Baseball can do that to you, especially at a young and tender age. The general aesthetics of the game just tugs at your heart and wins you over for life.

To be painfully honest, when the doors to Great American Ball Park opened in 2003 there had only been four or five years of successful baseball played in the Queen City since the Big Red Machine years of the Seventies, with 1990 being the only championship run lead by Barry Larkin, Eric Davis, and Lou Piniella.

Then in the off-season between 2007 and 2008 the attitude of the inner circle of Reds ownership changed when the Castellini family bought the controlling interest of the franchise and started the difficult task of building a solid base of talent in the minor leagues which is a must for a small market MLB franchise like Cincinnati.

This particular year has been special in several different ways. The Reds have been a franchise for many years built on solid everyday position players intent on outscoring teams with a strong offensive presence and just enough pitching to get them over the hump.

That philosophy changed slightly when Walt Jocketty took over as general manager. The Reds still have quality hitting, but have added a strong emphasis on quality starting pitching and solid depth in the relief corps.

The Reds opened postseason play this past weekend out on the West Coast in San Francisco and plastered the Giants with a two-day domination of pitching and hitting and setting the scene back in Cincinnati for their first chance at an NL pennant in over 20 years. On Tuesday, the Reds came up short, falling 2-1 despite the great pitching of Homer Bailey. Game Four was scheduled for Wednesday at 4 p.m. If a Game Five is necessary it will be played Thursday afternoon.

Meanwhile, don’t ever loose sight of Yogi Berra’s famous words, “ It ain’t over ‘til it’s over.”

Hopefully the 2012 Reds are mature enough to understand and embrace Yogi’s remark, because it’s stood the test of time in all sports for many decades.