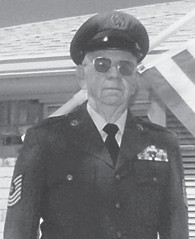 Mr. Adams was an Air Force retiree and served more than 27 years on active duty. His career span saw him in Okinawa, Korea and other assignments in the South Pacific, as well as the European Theatre in Germany and France, where he met his wife, Jeanne.

Surviving are his wife of 67 years, Jeanne Mabeix Adams of Big Spring, Texas; a brother, Paul Dean Adams and wife Joyceleen of Mayking; three sisters, Maxine Taylor of Minnesota, Margaret Adams of Mayking, and Martha Caudill of Plainfield Ill.; and a number of nieces and nephews.