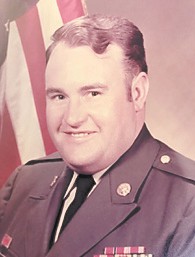 A son of the late Melvin and Vira Farley, he was born in Harts, W.Va.

Mr. Farley served in the Army from 1967 to 1975 and covered two tours in Vietnam and Korea. He was baptized at Millstone Missionary Baptist Church.

Funeral services were held April 1 at Letcher Funeral Home. Burial was in the Sergent Cemetery at Indian Creek.

In lieu of flowers donations are suggested to the Eastern Kentucky Veterans Center Residence Activities Fund.