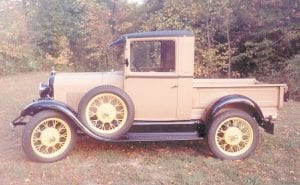 This 1929 Model A Ford was restored by Letcher County native Willis Sergent.

Letcher County, in the far eastern part of the state, can rightfully be proud of the many outstanding citizens it has produced. Dating as far back as 1770, these common Letcher County names can be prominently found in historical records: Sergent, Smith, Caudill, Collins, Miller, Morgan, Jones, Martin, Hall, Bentley, Fields — to mention just a few.

These names are synonymous with people who have made and are still making significant contribution to society in ways of life that are dear to our mountain culture.

The family I am highlighting in this story is that of Arthur and Maudie “Maud” Sergent. Willis is the youngest in that family of seven children. From oldest to youngest they are Benton Sergent, Alia Sergent, Andrew Sergent, Purnia Sergent, Paris Sergent, Mattie Sergent and Willis Sergent.

Arthur and Maud raised their family on property they inherited in the very head of Sugar Run, which runs into Camp Branch. Though much of the property was on the hillside, the soil was fertile and they raised productive fields of corn sufficient to feed their two mules, “Fred” and “Mag”, their chickens, hogs, and enough to make cornmeal for themselves.

They also had a lot of flat land where they grew productive gardens, sugarcane to make molasses, and apples galore to dry for winter eating.

That’s the family Willis grew up in. He said he has many pleasant memories of growing up on Sugar Run with his parents, brothers and sisters.

They had no telephones, no TV, no electricity, no daily newspapers, no really close store, but they had each other. They grew and preserved their own food for the winter. Yes, they worked hard, but they found time to visit their neighbors, go to town occasionally, and go see the circus when it came to town — usually once a year.

World War II greatly changed the lives of many mountain people. The Sergent family was no exception.

Willis and two of his older brothers, Andrew and Paris, served in the military. Willis was the last one in his family to serve in that capacity. By that time life in the head of Sugar Run had greatly changed. Fred and Mag had deceased. There were no chickens or hogs to feed, no gardens to grow, and no cane to make molasses.

The family has mostly moved north to find work. Arthur no longer came home with coal dust on his face. Instead he told of making chairs in the chair factory. Maud still had her warm smile, and she gladly welcomed friends to their house where the street almost touched their yard. She still wore her homemade apron. And her warm smile had not changed. It was a smile that made you know you were welcome.

Willis also had the skill of making one feel welcome. However, it was noticeable he had changed some. He no longer had the “head of Sugar Run” accent. He talked about “the plant” where he worked and the cars they made. His voice radiated with a sense of pleasure and satisfaction as he spoke of his work. He showed me pictures of his children and talked about his house and his neighborhood.

Sometimes, though, he talked about the head of Sugar Run and how much he missed it. Mostly, though, he discussed cars and trucks and new friends he and his wife Cindy had made since they had moved to Parris Crossing, Indiana.

The conversation, though, always drifted back to cars and trucks — new ones and restored ones. Willis especially loved to talk about, and if possible, show some he had restored. He laughed one day and said, “I build new cars at work and restore them when I come home.”

He said he got great pleasure out of restoring old models, entering them in parades, judging contests and showing them off any way he could.

Willis said he was happy when he finally reached retirement age because he would have more time to devote to his number one hobby, restoring cars and trucks.

In order to fulfill his dreams he said he knew he had to have a larger workplace at home. So he and his son got busy and built a 20×45-foot workspace that held all the tools, machines and gadgets they would need to realize their dreams.

They entered every parade they could, and they never refused an opportunity to talk about and display examples of their work.

Almost overnight they had developed an international reputation. Their first foreign sale was to a man in Germany. Shortly after that they moved one to Mexico.

As domestic sales increased, Willis knew he needed to start cutting back. “After all, when a man is retired,” Willis smiled, “you need some time for yourself. ”

Willis still has family and friends that live in Letcher County. For those who want to contact him, his address is Willis Sergent, 1950 West State Highway 250, Parris Crossing, IN 47270.