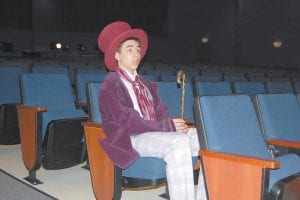 Paul Sokolowich, who plays Willy Wonka in Cowan Elementary School’s production of “Willy Wonka Jr.,” waited to have his picture taken during a photo shoot of a cast consisting of 38 students in grades six through eight. A public performance of the production is set for 7 p.m. on April 16 in the Letcher County Central High School auditorium. Admission cost is $5. (Photo by Sally Barto)