Wilson aims for return to top 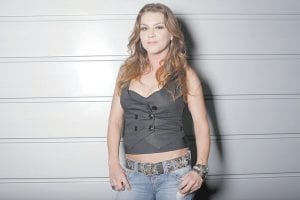 Gretchen Wilson the country singer has a lot riding on her new record, “I Got Your Country Right Here.”

Gretchen Wilson the CEO has so much more on the line.

“I feel like pretty much everything is at stake,” Wilson said in a recent interview at her sprawling farm about 30 miles east of Nashville.

Wilson has taken the ultimate gamble as she prepares to launch her fourth album and tries to plant a rebel flag at the top of the charts again.

The 36-year-old Grammy winner split with Sony and started her own record label, the aptly named Redneck Records. It’s been a long journey since the release of her last album, “One of the Boys,” in 2007, with plenty of highs (Wilson earned her GED and testified before Congress on the importance of education) and lows (she had to lay off employees and right a career that teetered off -kilter after a blazing start with her signature hit, “Redneck Woman”).

The decision to split with Sony has given the single mother of an 8-year-old daughter a new sense of empowerment, though. She’s in complete control.

Wilson been singing the songs, lining up the musicians, designing the album cover, picking the singles, brainstorming the T-shirt ideas, planning the tour and, most importantly, signing the checks for a venture aimed at making a twofi sted return to the top.

“When I parted ways with my record label, it was the first thing on my mind,” Wilson said. “The agenda that I had was to work as quickly as I could and get this music out. It’s taken a lot of energy and a lot of time, but it feels wonderful to work for myself and to be in control of everything.”

Wilson’s bartender-turnedqueen of the trailer park success story remains a beacon to country music aspirants everywhere. But hidden behind the hit records and the full houses of adoring fans was a little tidbit that might surprise a lot of people.

“I’ve not seen any money on royalties from anything I’ve done yet,” she said.

Wilson has sold more than 6.2 million albums, Nielsen Sound- Scan says. But she says she split costs with Sony for everything required to send all three of her albums to the top.

“Kind of makes you wonder what that number that we spent is, doesn’t it?” Wilson asks with a wry smile.

A Sony rep said officials were unavailable for comment on Wilson’s claims this week.

Wilson did all right on concert ticket sales and other sources of revenue, but as album sales declined, the venues got smaller and the recession took hold, she was forced to lay off about 12 employees in her business and touring group.

“Twice in January I’ve had to do it in a couple of diff erent chunks,” Wilson said. “It’s the hardest thing ever to do. (They were) people that really believe in you and have been working on a project with you and trying to get you back where you truly believe you belong. I think it’s harder for me to see in my crew’s faces and my band’s faces sometimes, you know the stage we used to be standing on compared to now.”

Wilson has played a string of recent dates at smaller clubs that might hold 800 compared to the 8,000 she used to play for. While she has found a way to enjoy a much smaller ruckus on the road, she says her story isn’t unusual.

“Most of the time an artist faces bankruptcy when they’re at the top of their career,” she said. “That goes back to again how much money did you spend to get this song out there and the video and the promotion and everything else it costs to actually get your song to the No. 1 position.”

Wilson’s first album, 2004’s “Here for the Party,” shot to the top of the charts on the strength of her No. 1 country smash, “Redneck Woman.” She sold 4.6 million copies and was the toast of Nashville, and pop music in general. She even topped Kanye West for best new artist at the 2005 American Music Awards, prompting one of his early awards-show meltdowns.

Wilson blames some of that third album’s struggles on her frame of mind during songwriting. She said she wrote more like a “girly girl” than the no-holds barred, bare-knuckler persona that took her to the top.

She tried to get back to the bravado on “I Got Your Country Right Here,” released last week. John Rich, Wilson’s friend, confidante and sometimes producer, thinks she hit it just right.

“I think this album, she’s kind of made the full circle,” Rich said. “I think it’s great. Any artist wouldn’t want to sing the same subject matter over and over and over, and she’s no diff erent. I think that route that she’s made has been great and she’s recorded some great songs, and I think this album is turning people on because it does remind them of when she first came on the scene and was really heating it up and laying it on them hard.”

Work on “I Got Your Country … “ started about a year before the split with Sony. Wilson said she had to buy some of the songs back from Sony when she split with the label and has financed everything else since.

She’s been making crucial decisions — how many CDs to press and ship for the release, for instance — with a small team of advisers who she considers friends and like-minded souls.

Her single, “Work Hard, Play Harder,” is at No. 30 on the Billboard country singles chart after 21 weeks. Wilson believes with all her heart she’s got another establishment-rattling, charttopping effort for her fans. But what if she doesn’t? She’s thought about that, too.

“I’ve found that there’s so much peace and happiness on my front porch for 30 minutes when the sun’s going down that sometimes it will erase three weeks of craziness and chaos, and that’s what it’s all about,” Wilson said. “Just those 30-minute things that you get. And that can happen on 400 acres or it can happen on a half-acre lot in a trailer park.”