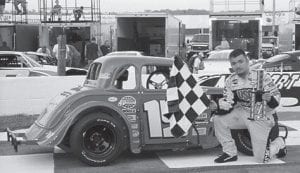 Local racer Jim Caudill Jr. captured his first Legend car feature win at Lonesome Pine International Raceway Saturday. A former kart racer at Mountaineer Kartway in Isom, he moved to asphalt car racing last season. The win at LPIR makes his second win of the season. He won at Newport Speedway in Tennessee and has three second-place finishes in five races this season. Caudill is a 2007 graduate of Letcher County Central High School. He plans to attend Southeast Community College this fall and continue racing along with getting an engineering degree.