Winning races or the title 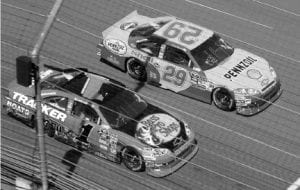 Jamie McMurray (1) and Kevin Harvick raced down the front straight during the NASCAR Brickyard 400 auto race at Indianapolis Motor Speedway in Indianapolis on Sunday. McMurray won the race. (AP Photo)

Every one of the 36 races that makes up the Sprint Cup schedule counts the same exact number of points that in theory would make each race equal. The truth is that is not the case as some races just carry more history and prestige than other stops on the schedule.

There is no arguing that the Daytona 500 is “THE” race on the schedule and that every driver will quickly tell you that is the one win that they want on their record before they crawl out of the car for the last time. Deciding which race may follow the 500 in importance may come under some discussion, but it is hard not to say that the Brickyard 400 held at the historic Indianapolis Motor Speedway is not that race.

The Brickyard 400 gets the nod more for its location than it does for the race itself. Indy has been the home of racing for more than 100 years and its own Indianapolis 500 for the open wheel cars is considered an American tradition. It’s this long history of the speedway that enables the Brickyard to get the nod over other Cup races such as Charlotte Motor Speedway’s Coca-Cola 600.

Winning either of these two events during a driver’s career would be quite an accomplishment, but to win both in the same year would elevate that driver’s career considerably. This past weekend at Indy, Jamie McMurray accomplished the feat when he took the checkered flag in his Earnhardt-Gannassi Chevrolet. This just happened to be his second win of the season, with his first win coming in the season-opening Daytona 500.

There is no bigger media coverage on the schedule than at Daytona and Indianapolis, so for a driver and owner to win both in the same season is a dream come true. It assures that the driver and owner are going to be talked about and followed for the entire season, but the real winner may just be the sponsor. When the media is covering the driver and owner, it also means that the sponsor is happy as his name and logo are being seen on TV, heard on radio, and read in newspapers and magazines.

Is it possible that McMurray and his team are better off winning these two races than making it into the Chase? Every one of the 12 drivers that makes it into the Chase will have an opportunity to win the title, but past seasons have taught us that many of the drivers that make it quickly fade out of contention and become nothing more than an afterthought with the media.

McMurray now sits in 16th place in the point standings and is 151 points out of the all-important 12th spot that assures him a spot in the Chase. Even though he is a long shot for making it in the elite list of 12 drivers, the year that he has put together has grabbed more headlines than many of those drivers ahead of him in the standings.

Of the drivers that now make up the top 12, seven are yet to win a race including second-place driver Jeff Gordon. Drivers sitting in the spots seven through 12 are all winless on the year. By having won two races, McMurray puts himself in elite company as being one of only six drivers to have won multiple races this season.

Trading his wins for a few more top-10 finishes might have Mc- Murray in the top 12 at this point in the season, but is the trade-off really worth it? The championship should be the goal of every driver, but there is only one champion while there could be up to 36 race winners in a season. If you are a driver and you can’t win the title, at the end of the year wouldn’t it be great to say that you did win both the Daytona 500 and the Brickyard 400?

Racing for wins should be the way that the championship is won, but unfortunately the way the system is now, you don’t have to win races to be in the Chase and win the title. Winning races should always be the goal and even though McMurray is a long shot to make the Chase in the closing weeks leading up to Richmond, you have to agree that those two wins make for a great season, maybe second only to the eventually Cup champion.