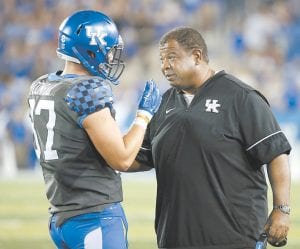 After Kentucky won at Louisville in 2016 when the Cardinals had Heisman Trophy quarterback Lamar Jackson, recruiting coordinator Vince Marrow knew the program had more clout with recruits.

“I felt like I was doing a pretty good job recruiting but that Louisville game gave you a foundation of what we could be. I go in with a swag the way I recruit but then I went in with even more confidence now that it was on paper what we did,” said Marrow.

“We recruit up north and we had to beat one of those Big Ten schools whether it was Michigan, Michigan State, Ohio State, Penn State. When we beat them, we always had a strong spot in Ohio but beating Penn State made us even more secure because the logo of Penn State in Ohio and Pennsylvania and Maryland is very powerful,” Marrow said. 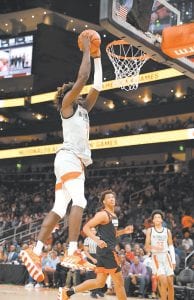 Marrow said this year’s spring practice, which ended last week, was a constant grind for the players.

“We played in a New Year’s Day bowl … when I first got here, we had a lot of time off (after the final game because UK did not go to bowl games). Now it is like it seems like season just ended and we were into recruiting, winter conditioning and spring ball,” Marrow said. “It has been good but no matter where I go now the credibility of what we did and who we are is evident.”

It’s almost like Marrow has become a rock star in Kentucky. Everybody knows “Big Dog” whether it is high school coaches, top recruits or UK fans. He’s a tireless recruiter but also shows up at numerous UK sporting events where fans see and appreciate him.

“Coach Stoops said to me one time, ‘I am the head coach but you are a very popular guy in this town and this state.’ I never really pay attention to it,” Marrow said.

Marrow said Lexington is a lot like Youngstown, Ohio, the blue-collar town where Stoops and Marrow are both from.

“I have really adapted to this state and the people. Our goal when we came here was to change this culture. We are from Youngstown. We come in and think we are pretty good in football and how we compete. You come in here and this is no knock against nobody. Being at the bottom and getting your teeth kicked in, and I think I can speak for any coach, that bothered us,” Marrow said.

“We wanted to get this going but it was never just to get to the middle of the pack. Me being around Mark a lot, we wanted to get to the top of the mountain and how do we get there. It was hard. We were getting beat and we heard all the jokes about Kentucky football. Even now I look at it and we have a legitimate shot to get eight or nine guys drafted and people are questioning Josh (Allen), Benny (Snell), C.J. Conrad.

“Check Alabama or Ohio State, that’s the norm (to get that many guys drafted). What we did here was build that. What Benny did in this conference, that’s amazing. I don’t care how you spin it. I had one NFL GM (general manager) tell me we are looking at what this kid did. He had watched Kentucky for years and how it went from 2014 to 2016. He said you can’t question Benny Snell.”

Marrow wonders how anyone can still question Allen, the national defensive player of the year.

“I look at this draft and is this a normal thing or is it just Kentucky and nobody believes in us still. Now these guys on that stage, especially 26 (Snell) and you pass on him, you are going to regret it. He is going to play. I am not saying people will pass because a lot of people like Benny. His play speaks for itself.”

One day after Kentucky lost to Auburn in the Elite Eight, coach John Calipari got what many termed a “lifetime contract” to stay with the Wildcats in part because of a push UCLA made to hire him. Calipari said there was no better place to coach than Kentucky but no matter what kind of contract he has, the end of every season likely will continue to bring Calipari coaching rumors.

Some UK fans were upset with Calipari after UK lost to Auburn even though he’s won 305 games in 10 years at UK and been to the Elite Eight seven times and Final Four four times. He also has that 2012 national title. On top of that he’s already had 25 first-round draft picks and could have up to three more this season.

ESPN analyst Seth Greenberg said UK and Calipari were a “perfect match” after the contract extension was announced.

“He embraces everything that is Kentucky basketball. The history and crazy fans that make up the BBN. They are made for each other. Most would be swallowed up by the responsibility that comes with it. He welcomes it,” Greenberg said.

Former WLEX-TV sports director Alan Cutler, who knew Calipari before he came to UK to coach, embraced the extension also.

“I would hope no one is upset at Cal’s new contract. Basketball is big business and he’s earned this. If you want to yell back at me because you don’t agree, don’t bother. Not interested,” Cutler said.

Rivals.com recruiting writer Krysten Peek talks to the top high school players nationally every year. She says there is always one common theme any time she talks to a top recruit or his parents about UK.

“It’s coach Cal and what he gets done for players and the team, the whole university,” Peek said. “He is a legend for sure and now you see it even more with that lifetime contract. He’s a player’s coach and kids like that.”

She noted what Scottie Lewis said about Calipari even after he picked Florida over Kentucky.

“He said Cal was one of the realest guys he’s ever met, which is pretty high praise after he picked Florida,” Peek said. “He said even after he committed to Florida that Cal called and said, ‘Anything you need, let me know and I will be rooting for you.’ That shows Cal’s character and how he does care. That’s why players love and respect him. You can’t fake that with kids.”

“Me, Khalil and Tyrese played at USA (Basketball) camp and other camps so we have a great relationship off the court,” the 7-1 Wiseman, who picked Memphis over UK, said. “They are both great. They are dynamic players.

“Tyrese Maxey is a great playmaker. He can make plays for teammates at any time from any place. Kahlil Whitney is just a dog. He can get rebounds and can do everything on the court. He’s a true two-way player and really an intense player.”

“He is a great player and was at USA camp, too. He is 6-8 and can shoot off the dribble and score a lot. He’s a dynamic player who can really change a game,” Wiseman said.

What if he got a chance to play against the all three and UK in the 2020 NCAA Tournament?

Wiseman was named the McDonald’s Player of the Year after averaging 25.8 points, 14.8 rebounds, 5.5 blocks and 1.3 steals per game. He’s already being projected as a top three NBA draft pick in 2020. He had 13 points at the McDonald’s Game — the same number Maxey had.

For two years Kentucky seemed to be Wiseman’s leader before Penny Hardaway got the job at Memphis when Tubby Smith was fired after last season.

“Kentucky was right there. Coach (John) Calipari is a great coach and I was going to go there but me and coach Penny have a great relationship and I just had to follow my coach. There were a lot of scenarios that got me to Memphis,” Wiseman said. “Kentucky would have been my second option and my third option was Florida State.”

Coach Rachel Lawson doesn’t want to say that freshman outfielder Kayla Kowalik of Texas has been a surprise this year with the role she’s played offensively and in center field.

“She was obviously a very big recruit for us. We know that she is super talented and incredibly strong. I don’t think her play has come as a surprise because of that,” Lawson said. “It’s been nice that it has come a little bit quicker than most freshmen can do it but she is an exceptional talent.”

The Kentucky freshman wears No. 99, something she started doing in travel ball at age 8.

“They asked what number I wanted and I said 100. You can only have two numbers (on your jersey) and 99 was the next best. I just stuck with it. It works for me,” Kowalik said.

Her fraternal twin, Gabbie, now plays at St. Louis. Both twins have been their conference player of the week this season.

“We don’t look alike. She is 27 seconds younger than me,” the UK freshman said. “Both of us always played softball. We picked up other sports, but softball was just kind of the thing we always came back to. I was a catcher and she pitched when we were growing up but decided pitching wasn’t for her and now she enjoys the outfield.”

Like most twins, they grew up doing everything together.

“This is our first time truly being apart and so far we are taking it well. I am having no problems but when we were young we definitely dressed alike and played the role of twins,” Kayla said. “As we got older we got our own personality and own sense of style. She is at St. Louis University that is not too terribly far from here. We are actually closer to each other than we are from home.

“I always knew I wanted to get out of Texas. I didn’t exactly know where but when I visited this campus it just felt like home. I have been dealing with 18 hours away from home, but it’s not that bad.”

She’s become a starter on a team stacked with seniors. She admits starting surprised her some but she took that as a reward for the hard work she’s always done.

“The coaches here are willing to give us a shot. I am very grateful for the chance they have given me,” she said. “If there is a role that I can fill, then I am happy to do whatever that might be and right now that is in center field.”