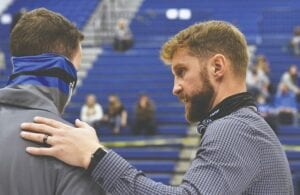 Winston Lee (right) is the new hoops coach at Jenkins.

The Jenkins Cavaliers boys’ basketball team has its new skipper.

Jenkins Superintendent Damian Johnson confirmed recently that Jenkins has hired former Letcher County Central High School boys’ basketball coach Winston Lee as a teacher in the district, and that Lee has been named as the new coach for the Jenkins boys basketball team. Johnson said Lee’s hiring was made official June 4.

“ First and foremost, Coach Lee will be a quality teacher dedicated to his students and their education,” Johnson said. “He has aspirations for immediate improvement through structure, hard work and accountability. He also has a long-term plan for building for the future through engaging players in basketball at a young age and working to develop skills.”

Lee, who was fired as Letcher Central’s head coach following the 2021 season, his fourth season as head coach, said he is looking forward to a “new beginning in teaching and coaching,” and is “excited to help instill even more pride and success onto the hardwood and in the classroom.”

“I truly appreciate the Jenkins administration and staff for welcoming myself and family,” Lee said “We can’t wait to wear green! We’re also looking forward to the family atmosphere that many have mentioned throughout the hiring process.”

Lee finished his tenure as LCC’s head coach with a 45-64 record, including posting a winning record, 11-10, in his final season. He previously served as an assistant coach under former head coach Robert Hammonds. Lee’s hiring at Jenkins thrusts him into new territory with a significantly smaller team.

“I believe Coach Lee to be a man of character who will be a positive influence on our student-athletes,” Johnson added.

Lee said academic successes at Jenkins helped draw him to the school. In the Fall 2020 semester, 32 Jenkins high school students in grades freshman to senior earned 195 college credit hours. Lee complimented the district and its students for that success.

“ Huge steps in renovation and the furthering of academic possibilities served as a big draw for me and must be extremely important to students, student-athletes and their families,” Lee said. “Mr. Johnson and the Board of Education have done an amazing job in setting Jenkins along the path to success. Now, we’ll put in the work to continue to new heights. Go Cavs!”