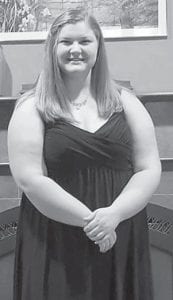 Happy Valentine’s Day everyone! Again I will say I hope everyone is staying warm, as it seems that I am bone cold and can’t seem to get warm or stay warm long, no matter what I do.

This part of the Ohio Valley area has really been lucky as we’ve had a very mild winter. Well, winter hasn’t officially been around long, we may really get hit hard through February and March, so what am I thinking about? Anyway I will be glad to see spring arrive.

Each time the roads are bad there are either school delays or closing, which is necessary for the safety. My thoughts travel back in time of school days in the mountains I call home.

Children walked to school for miles during the winter, regardless of weather conditions. Some, like myself, didn’t have sufficient clothing to wear — heavy coats, gloves, scarves, or even good shoes, much less boots on their feet.

I wore hand-me-down coats that were too big for me, and my mom made my dresses out of feed sacks. Once in a while she would manage to buy a yard or so of brought on material as she called it, meaning store bought material. 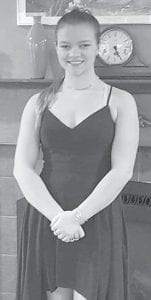 Rose Ballard’s granddaughter, Katelyn Nottingham, at the Beechwood High School winter formal. She is a sophomore.

I never had a new coat until I bought my first coat when I was sixteen years old. Several times a hole would be worn in the bottom of my shoes. I would tear a piece of cardboard to try to keep my feet from being in the dirt. That sure didn’t last long as the water would wear the cardboard out.

Grandma had an iron shoe last. There were times she would put in a piece of leather as she wouldn’t have the upgrade known as half soles. That would last until the tacks came through, and then there was more cardboard used again. Finally Daddy would get me a new pair of shoes.

Before Wallace Lee was old enough to go to school I’ve worn his shoes, which were called Brogans with the metal hooks at the top, to school when it snowed, along with his long underwear, which opened in the back.

I don’t recall in my seven years of attending Mill Branch Grade School, of school ever being called off. 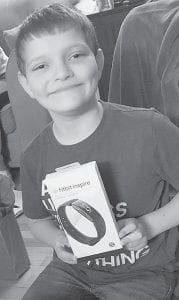 For one thing, how were they to call, since very few people had telephones? The first and only television I remember as a child was in the home of Ray and Faye Gentry at Roxana. It had so much snow you could hardly see a picture. The antenna lines were run way to the top of the mountain for reception.

When I read about some younger than me writing about Barbie dolls. I have to really smile, as at the time of growing up I received one doll. My brother Wallace Lee got a red wagon the same Christmas, and there were never any more toys after that one Christmas when I was about seven or eight years old.

How I longed for a bite of peanut butter sandwich that some children were fortunate enough to bring to school for lunch. My school lunch consisted of milk and cornbread in a four-pound lard bucket. But I was very lucky, as some children didn’t have anything to eat.

There were lots of times I would eat a little of the milk and bread, then give it to someone. Now I would let someone eat after me, but I would never eat after anyone.

During my childhood we had a water bucket with a dipper that was shared by everyone, family and anyone that came to visit. Not sanitary by today’s standards by any means, but I don’t remember anyone becoming ill from catching anything.

Time turned back on me this morning as my son asked if I could make him some biscuits and gravy. I got a small bowl to put flour in, made a small well in the flour, added the ingredients, mixed everything, squishing the dough between my fingers forming a round ball, slightly putting flour on both hands, and pinched a small amount to form a biscuit.

During this process, as I looked at my hands, and memories of Mommy’s hands came before me so plain, as I could vividly see Mommy roll the biscuits, take her knuckles to make an indention, then adding a little melted lard to make the biscuits brown. Such a peaceful feeling came over me. It has been a long time since I actually made real biscuits, as I usually just drop them on a greased pan and bake.

Johnny and Ann Calihan are still trying to learn to cope with life as best as they can. Their children and granddaughter are very helpful, they visit often and are seeing Johnny and Ann get out to go eat with them. I tease Johnny about making him a “run-around man.”

Hayward Day, I hope you are doing better, please try not to fall again. Now just look who is giving you advice, as the floor likes to come up to visit me.

Les and Pat Wagner, Becky, Polly and Becca, it was so good to see you. Now Les could have at least shared that delicious sundae that he had for dessert.

Tony Hale & Blackwater Band sure does a great performance. Sunday was Old Time Fiddlers. It was a beautiful day as the sun was wonderful, a little breezy still was a beautiful day. We had a good crowd. OTF is finally growing. If anyone is in this area, please come enjoy a couple of hours of music. This takes place the first Sunday of each month, 1-4:30 p.m., at the VFW Post 7570 at 9160 Lawrenceburg Rd., Harrison, OH 45030.

Saturday morning, Sunrise Ridge Band did a great interview on WSGS radio station promoting their new CD that is really good. I made sure I listened. Sunday afternoon Sunrise Ridge was on WMMT.

I usually don’t write political things in my column, but if Kentucky doesn’t get rid of Mitch McConnell, they are making a big mistake. Until next time, Rose Ballard, 9110 Lawrenceburg Rd., Harrison, Ohio 45030 email: Bluegrassmama4@aol.com.