Winter is trying to linger on 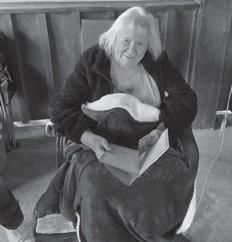 Hello everyone. Mother’s Day is just a memory. Like everything it seems to get here and is gone. I hope everyone had a good day.

It was an unusual Mother’s Day for me. I’ve spent so many years volunteering at the Appalachian Festival at Old Coney Island in Cincinnati until last year, and of course this year they have been closed due to the coronavirus.

I think winter is trying to linger on and spring has disappeared as it is cold in this part of the Ohio Valley area. Frost is expected for the next couple of days; temperature is in the low 30s this morning.

Readers, as if you don’t know or haven’t experienced it, life is fragile, handle with care, and always expect the unexpected. I could go on and on with true clichés.

My first cousin Gracie Widner of New Tazewell, Tenn., formerly from Partridge, has been battling cancer of the liver several years. Gracie has been in stage four a long time. Actually I think she has almost died a couple of times. She has osteoporosis, which is weakened bones. A few months ago she fell and broke her leg, and the doctor said she would never walk again. Gracie is mainly able to walk a tad bit with her walker, yet she can take a few steps without assistance. 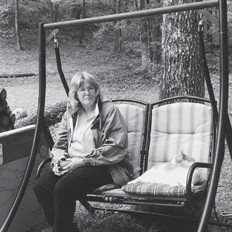 Daphne Korner sits at Mike and Marcia Caudill’s with her new friend, Oliver the cat.

Monday afternoon, Gracie and her husband George Widner faced something that no doctor or medication can cure, the heartache of the loss of a child. Their only son was on his way from work, evidently fell asleep and drove underneath a flatbed truck as it was making an exit.

I’ve only seen Gracie and the family two times in the last 30 years, or so.

Our Grandma Rosa Hall spent the last 12 years of her life with George and Gracie. I would go quite often to visit Grandma. If everyone had someone like Gracie in their lives, this world sure would be a better place to live.

George and Gracie lost a beautiful daughter due to a tragic fire when Patty was in her late teens, so she is not new to the pain of losing a child, but with Gracie’s health please keep this family in your prayers.

Last week Old Time Fiddlers lost a member, and the visitation was a few miles from Harrison, Thursday from 12 to 2 p.m. A friend, Daphne Korner, was to meet at my house and we would go together, then spend a couple of hours and return to my house.

When I got the obituary for Kenny, the visitation was Thursday evening at Tri-City Funeral Home in Benham. You may have heard a bluegrass song, “It is a long way to Hazard to get a little brew,” well, it is a long way from Harrison to Benham to get from one visitation to another.

Wednesday evening, I sent Daphne a notice that I was heading for the mountains, explaining what had happened so Daphne knew I had to get back home, and we couldn’t do as planned. I made one simple statement, “I wish you could go with me to the mountains.” Daphne said too short notice, as her husband isn’t well.

I asked Daphne to be at my house a little early as I planned to ask for permission to speak to the family and make my exit to head for Whitesburg.

On the way to the visitation I made the same remark, I wished Daphne was going, as she loves the area.

Daphne replied, “It is tempting.” Daphne was dressed beautifully for a funeral, but all she had was the clothes she was wearing. She had chosen a small purse just for the day so her next words shocked me, “I have my credit card, driver’s license and a small amount of cash, so I could go with you!”

We arrived at Ron’s visitation and I was given permission to talk to Ron’s wife explaining my situation and stayed a couple minutes.

Daphne and I returned to my house, and the journey to Whitesburg began. I had previously made reservations at Parkway Inn since Cavalry Campus would open on Friday. You take everything you need when you stay there. Now I had my car already packed, and in a few minutes I found sheets, towels, and blankets for Daphne

I called Parkway Inn, explaining it would be late before I could stop to register.

As I was driving on the way to the mountains, the air conditioning started my left wrist throbbing, and my fingers begin to cramp, enclosing around the steering wheel. My right ankle foot was cramping my toes curling under, and when this happens under ordinary circumstances I pull off to an exit and stretch, then rest a tad bit and continue. I had no time as I pulled off at the Natural Bridge rest stop, and Daphne drove the rest of the way. Actually, I wasn’t back under the steering wheel the entire rest of our trip.

It was a sad occasion, yet a little joy. I hadn’t seen some of George and Gracie’s family and her sister Lorene Deal, and brother Donald Ray Lewis in years.

Donald Ray was in service the last I heard of him. Donald Ray spent two terms in Vietnam. He now calls Tennessee home.

Afterwards Daphne and I stopped at Walmart where she had to purchase a complete wardrobe, plus personal items. As usual I was hungry, so I came away with enough snacks for Daphne and me to share.

Friday, we went to Tricity Funeral Home for the funeral, then followed the hearse and the crowd to the family cemetery at Partridge. Daphne had never seen a mountain burial, so this was a learning experience for her. After goodbyes were said, George Widner gave me directions to get to the cemetery where Aunt Bertie, Uncle Johnny Lewis and Grandma Rosa Hollins Hall were laid to rest.

A few years ago I could have skipped to the cemetery. Grandma was laid to rest there in 1989, and I hadn’t been there since.

It is a small, steep incline, so I had to use my cane to climb up with caution. On the way down, Daphne held my hand. By the time we got to Cavalry Campus, unloaded the car, and fixed our beds, we were completely exhausted.

This time we both had no service on our cell phones. Saturday, we found out Campbells Branch Community Center opened for music.

I really don’t know if I had tried to attempt going to Campbell’s Branch Community Center or not, as I was past being exhausted. I probably would have gone if I was getting my last breath.

I just wish I had known in advance, as nothing was on the computer before I left Thursday morning.

Saturday morning was a dreary morning as it rained during the night.

Daphne and I were supposed to meet at Buddy and Bernice Grubb’s as we were going to follow Bernice to the flea market across the mountain to Virginia. That was postponed, then the sun came up and Daphne and I decided to try to find it.

Daphne really enjoyed the flea market, as she found a few things she loved. I found Bernice’s son Chuck Grubb’s table, and was shocked to see his son Mike whom I love dearly. To be honest I was still exhausted and wasn’t sure it was Mike for a little bit, as I was too embarrassed to say, “Aren’t you Mike?” Also my blood sugar was dropping. I ate a piece of candy, then I was alright.

On the way back to Whitesburg I had Daphne drive around Fishpond Lake, then we went to visit my niece, Sue Hall.

Friday, Sue had to return to Vanderbilt Burn Center in Nashville, Tenn. She is improving, but still not out of danger.

Daphne and I decided to stop at Long John Silver’s for a bite to eat. They were serving at a window but as we got to the window the cashier said, “We are closed!”

We went to Food City then walked out, so I remembered about Halcomb’s Custard Stand in Isom. Daphne was really impressed with the food.

Our next adventure was to Mike and Marcia Caudill’s for a bonfire and marshmallows. Daphne made a new friend as she fell in love with Oliver the cat that is trying to win me over. Now there are two little black dogs that are capturing my heart.

Mike and Marcia caused me to want to shed the tears that I had been holding back, as the two of them purchased a firepit for me, and, of all things, were going to ship it through the mail.

Actually I had already made up my mind to get a small one like this, so I could entice someone to come sit with me outside, or go out by myself early in the evening after dark while my son Keith was awake.

As quick as this cold spell breaks, I am going outside, and to steal a phrase that Marcia Caudill is the only person that knows what I am meaning, I will take my husband along. Thanks, Mike and Marcia, from the bottom of my heart, for making it a wonderful Mother’s Day and early birthday. This is gift I will enjoy for a long time.

Daphne, I really enjoyed your beautiful home and seeing you again.

We finally got back to the campus, and no one had to rock us to sleep.

A man called into WSGS saying negative words, that a woman couldn’t run a house much less be President. Well, I wish I could have replied to this this man. We’re past the days of women not needing an education to wipe a baby’s snotty nose and change a poopy diaper, which was the saying when I was growing up.

When my first grandchild was about two years old, I taught her a phrase, “What boys can do, girls can do better!”

I am proud there’s a woman Vice President.

Women has come a long way, and you bet your boots I am a hardcore rebel when it comes to women’s rights.

Now back to a more pleasant subject. Since I thought I was going to be traveling alone, I called Letcher Manor Nursing Home and made an appointment to see Tommy Tendell early Sunday morning. I didn’t want to cancel and Daphne sat in the car while I had a 15-minute visit.

My first visit was absolutely a joy, as I saw Tommy from the waist up. Yes, I knew he is an amputee. This visit was on the porch, and seeing Tommy up close and personal brought back so many memories of my brother Wallace Lee Hall and my sister Loretta Church, plus everything I had been through for the past three days, I really had to force myself to joke with Tommy. I will go back to visit when I return to the mountains.

Bertha Turney is in Tri City Nursing at Cumberland. I don’t have an address. Please find the address and send her a card.

Hello to Buddy Grubb. I just realized I didn’t stop to see you. I am sorry

Please remember the Calihan family in your prayers.

Daphne and I did stop at Faye Martin’s beautiful home. More on the trip next week.