With shake-ups, AC/DC perseveres with album 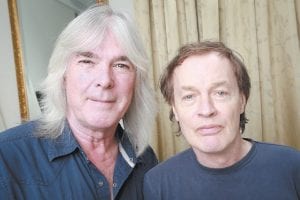 Members of the rock band AC/DC, bassist Cliff Williams, left, and guitarist Angus Young posed for a portrait in promotion of their new album, “Rock or Bust” in New York. The new album was released earlier this week. (Photo by Amy Sussman/Invision/AP)

AC/DC finally joined iTunes in 2012 after years of refusing to do so, but make no mistake, the Australian rock band is still old school.

“I would like everybody to buy vinyl again,” guitarist Angus Young said in an interview. “That’s my favorite.”

He continued with a loud laugh: “They ought to make them portable — iVinyl.”

AC/DC, which has enjoyed four decades of success, released “Rock or Bust,” its first album in six years, earlier this week. It is the follow-up to “Black Ice,” which sold 784,000 units during its first week in 2008.

The band has yet to join Spotify, something Young said is possible.

“I guess, if it’s doing a good service. I mean, we’ll certainly entertain the idea, I suppose,” he said, though Cliff Williams followed with the question: “Is it like Pandora? I’ve heard of it.”

“Rock or Bust,” which has received favorable reviews, is a typical AC/DC album and one the band hopes fans will listen to on record players, in addition to iPhones. It was recorded in May.

In a recent interview, the two members were full of laughter and good energy as they discussed their new music and upcoming world tour, planned for next year. But the band is in the midst of turmoil and tragedy despite its success: Drummer Phil Rudd was recently charged with threatening to kill, and guitarist Malcolm Young, who has dementia, left the group in September.

Rudd, who showed up late to court in New Zealand last week and clowned around by jumping on the back of one of his security guards, is also charged with possessing methamphetamine and marijuana.

Young said Rudd was acting strangely as the band recorded “Rock or Bust” and were starting to promote it. They plan to go tour without him, he said.

Ironically, Rudd’s next court appearance is set for the same day that “Rock or Bust” will be released.

“It was progressing further, but he knew he couldn’t do it. … He had continued as long as he could, still writing. But he said to me, ‘Keep it going,’” Young said.

Malcolm, 61, is being replaced by their nephew, Stevie Young, who filled in for Malcolm during AC/DC’s U.S. tour in 1988. Stevie also plays on “Rock or Bust.”

“He’s about the closest who plays like Malcolm and he knows that style. And for him it’s natural the way he plays,” Young said. “Malcolm has that hard-rhythm solid sound and Stevie … he grew up on that. That’s who he emulated. He stuck to that style, which is a unique thing.”

“Stevie’s personality is very much like Malcolm’s as well, and you kind of play how you are,” Williams, 64, chimed in.

“He was sounding great from (the) get-go. He was a bit worried,” Young said.