Without a cow here you had no milk 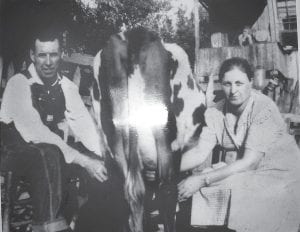 At a recent meeting of the West Letcher Oral History Society in the Blackey Public Library, Elder Elwood Cornett told about the importance of milk and butter in the diet of the early settlers of Letcher County.

Milk was the drink served at every meal. No pioneer housewife would even think about fixing breakfast without gravy and biscuits, and milk was needed to make both. Butter was needed for cooking and baking, and it was placed on the table at mealtime. A glob of butter smeared on a piece of hot cornbread tastes oh-so good!

Since milk was not available in the early stores, pioneer families needed to provide their own milk. And that required the family to have cows.

Thus, for the pioneer family to have milk, the farmer needed to have his cow get in a family way. Once the calf was born, the cow started producing milk. Most farmers kept the cow and her calf separated until milking time, at which time the farmer allowed the calf to nurse. Otherwise, the calf would nurse throughout the day and the cow might not have sufficient milk to meet the family’s needs. The calf was weaned from its mother’s milk as soon as possible so the family would have more milk.

After the calf finished nursing, the farmer removed the calf, washed the cow’s udders, and milked the cow. The cow was fed ears of corn to distract her while she was being milked. The cow was always milked twice every day.

Some cows liked to kick while being milked. Made for-the-purpose devices called “kickers” prevented the cow from knocking over the milk bucket or injuring the person doing the milking. Kickers came in many designs, but a simple kicker was a chain that “handcuffed” the cow’s rear feet together.

Obviously, the milk was warm as it came from the cow and had to be cooled quickly and kept cool to prolong the time before the milk spoiled. Since the pioneers lived before refrigeration, they stored the milk in a springhouse or a hand dug well. Water coming directly from the ground was not as cold as today’s refrigerators, but the water was cool enough to keep the milk safe to use for a short time.

The pioneers poured the milk in a designed-for-the purpose metal milk bucket that had a lid and a bail. A rope or small chain was attached to the bail of the bucket, and the bucket was lowered into the water of the well or spring until the bucket was mostly submerged.

Since a cow produced milk for only about eight or nine months before going dry, to have milk the year round, the farmer needed to have at least two cows and to time their calving about six months apart. Since many families of that day had eight or 10 or more growing children, those families needed to have more than one cow giving milk at a time.

Different breeds of cows provide different types of milk. Black and white Holstein cows produce a lot of milk, but their milk does not contain much butterfat — nature’s version of low fat milk. Light brown Jersey cows do not produce as much milk, but their milk is very high in butterfat. Many families wanted a Jersey cow so they could make butter from the milk.

Unlike today’s homogenized milk, the milk of the pioneer days separated after setting undisturbed for a few hours. To make butter, the cream, which floated to the top, was skimmed off and stored in a separate container. The cream was collected from several milkings to accumulate enough to make a churning worth- while. Once enough cream had been collected, it was poured into an earthenware churn. A cloth was tied over the top of the churn and the churn was put in a warm place—in the sunshine in the summer and near the heating stove in the winter. The cloth allowed the churn’s contents to breathe and the heat caused the cream to “turn” (clabber). The length of time that it took for the cream to turn varied with the temperature, but about one day was often enough. Once the cream has clabbered enough, the churning process began.

Constantly churning the clabbered cream caused the particles of butterfat to cling together. After the churning process was completed, the glob of floating butterfat, now called butter, was removed from the churn. The small amount of milk still remaining in the butter needed to be removed to prevent the butter from quickly spoiling. To remove the milk, the butter was placed in a pan of cold water and kneaded. This rinsing process was repeated enough times to remove all the milk. The butter was then pressed into a bowl or butter mold to remove water. The butter could now be stored for a limited time in the cupboard. Salt mixed into the butter extended its shelf life.

The buttermilk — the milk that remained in the churn after the butter was removed —was stored in the springhouse or well to be used in cooking or, by many people, for drinking.

The tinkle of the cowbell could still be heard in the hills of Letcher County well into the 1950’s and ‘60’s.