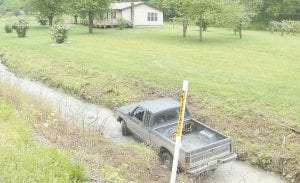 Jason Ray Ison, who was released from prison earlier this year after his conviction involving three vehicular deaths was overturned, has been identified by witnesses as being the driver of this Chevrolet pickup which went out of control and landed in Smoot Creek. The driver left the scene of the accident. (Eagle photo)

A 24-year-old Letcher County man whose conviction in a case involving three vehicular deaths was overturned earlier this year lost control of a small pickup truck he was driving last week and crashed into a creek, witnesses say.

The mishap occurred last Tuesday evening in the Smoot Creek community of Van. Witnesses say a small two-tone pickup was traveling along KY 1811 at a high rate of speed when the driver lost control and ran into a ditch on the left side of the road before veering back across the road and into Smoot Creek.

The driver, who apparently wasn’t seriously injured, got out of truck and covered his face as he began walking up the Smoot Creek road. He then began running, witnesses say.

Kentucky State Police opened an investigation into the wreck on May 27 after a wallet containing Ison’s driver’s license was found at the Creek property owner. Documents indicate the Chevrolet truck is licensed and registered to Norma Caldwell, who is identified in court records as being Ison’s girlfriend. 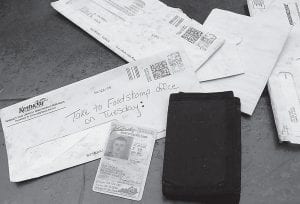 A driver’s license issued to Jason Ray Ison was found in a wallet at the scene of wreck involving a small Chevrolet pickup truck at Smoot Creek. Other documents found at the scene indicate the truck is licensed and registered to a woman who has been identified in court records as Ison’s girlfriend. (Eagle photos)

A Letcher County Grand Jury last month indicted Ison, of UZ, on three criminal charges, including one charge that he began selling hydrocodone, a prescription narcotic, less than a month after his January 22 release from the Little Sandy Correctional Complex in Sandy Hook, where he had been serving a sentence after being convicted in Letcher Circuit Court of connection with the deaths of his wife, a cousin, and his best friend.

The grand jury also indicted Ison last month on charges of criminal abuse and fourth-degree assault. The indictment charges than on March 20 Ison assaulted a girlfriend, Nola Caldwell, and criminally abused Caldwell’s child, who is less than 12 years old, by placing the child “in a situation that may cause (the child) serious physical injury or torture, cruel confinement or cruel punishment.”

Bond for Ison was set at $20,000 cash after last month’s indictments were returned, but he was released on a lesser property bond on May 20. Letcher Commonwealth’s Attorney Edison G. Banks had asked that the higher bond be left in place. 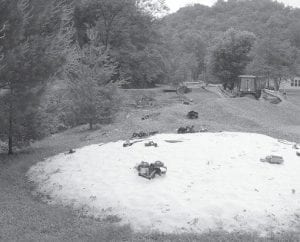 The out-of-control truck just missed this play area by a few feet. The area was occupied by young boys when the truck went out of control.

Ison won release from a prison sentence of 18-1/2 years after the Kentucky Supreme Court let stand a September 2008 ruling by the Court of Appeals which found that Ison was wrongly convicted of six criminal charges filed against him after his wife and the two other passengers in his car were killed in a traffic accident near Whitesburg in October 2005. The crash also resulted in a severe leg injury to the driver of an SUV.

The Appeals Court let stand Ison’s misdemeanor convictions on charges of having defective equipment on his car (bald rear tires) and failing to have automotive insurance.

Ison’s father, Gary Brashears of McRoberts, angered families of the three victims when he demanded an apology from court officials for what he said was the wrongful conviction of his son.