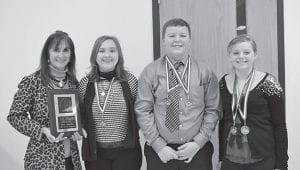 MEDAL WINNERS — Pictured are the Whitesburg Middle School speech team medal winners at the regional tournament with their coach Coach Debi Sexton, who is holding the plaque for WMS, the first place winner of the Appalachian Region of the Kentucky High School Speech League. Left to right are Courtney Whitaker, Dalton McCown and Kaitlyn Davis.

WMS had 20 members competing, and all 20 of them are advancing to the state competition. In addition, the league recognizes competitors who place first or second in region with a medal. Those receiving medals from WMS are:

The KHSSL’s state tournament will be in Lexington on the University of Kentucky campus March 14-16.