Woggles will ‘change your life’ 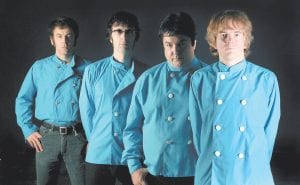 THE WOGGLES ARE COMING — Top garage band act The Woggles from Georgia will perform in concert at Summit City in Whitesburg tonight (Wednesday, April 22) at 9 p.m. There will be no opening act.

The Woggles, a legendary garage rock band out of Georgia, will make their Summit City debut tonight (Wednesday, April 22 at 9).

“For two decades, The Woggles have marched forth from Georgia like Sherman in reverse, leveling nightclubs with their hip-shaking, windshield-steaming garage rock fusillade,” the Austin Chronicle said of a visit to Texas by the band.

The Woggles have shared stages with such legends as Iggy & the Stooges, the Zombies, the Sonics, the New York Dolls, Johnny Cash, the Troggs, Dick Dale, Bo Diddley, Nancy Sinatra, the Pretty Things, and Big Star as well as artists such as the Strokes, the Raveonettes, Beck, Holly Golightly, Guitar Wolf and countless others.

From songs that shake the rafters to shows that make for “a dance party rave-up that could melt Dick Clark’s face off,” says New York City’s Village Voice, the Woggles are a “four-man delivery system for 200-proof, nitro-fueled rock ’n’ roll. They share a vision and blaze a trail with the same insanity as the true wildman originators of three-chord mayhem.”

Combine a whole lot of 1960’s rock’n’roll with a fist-full of soul, a hip flask of rhythm & blues and a splash of surf and you’ll have the exciting sound of the Woggles.

Signing with Little Steven Van Zandt’s Wicked Cool Records in 2006, their latest effort for the label is 2013’s “The Big Beat.” The title is a nod to famed DJ Alan Freed’s short lived weekly prime time TV rock’n’roll show that predated American Bandstand. Said Freed, “Rock and Roll is a river of music that encompasses elements of rhythm & blues, jazz, rag time, cowboy songs, country songs, and folk songs.” All have contributed to the “Big Beat.”

For the newest album, the Woggles forged 12 new songs and recorded them at Transduction Studio in Athens, Georgia. The sessions were engineered by Dave Barbe, known for his work with the Drive By Truckers. The lengendary Rodney Mills mixed and mastered. He’s worked with artists as varied as James Brown and the Meters, to the Atlanta Rhythm Section and Lynyrd Skynyrd, to the Cruzados and Pylon.

Other Woggles’ releases include 2009’s “Tempo Tantrum,” ranked by Spin magazine among the “Best of the Year.” and called “The soundtrack for the best biker flick you’ve never seen.” 2007 saw the release of “Rock And Roll Backlash” containing “It’s Not About What I Want (It’s What You Got).” The song was voted the first ever “Coolest Song of the Year” by listeners of SiriusXM’s Underground Garage Channel.

Guitar-slinger Flesh Hammer is a former member of 1980’s faves Guadalcanal Diary, also of Georgia. Since the Woggles’ first seven-inch in 1990, Mr. Hammer has also been in the producer’s seat for most of the group’s releases.

Mr. Elektro was already paying his dues at the age of 10 when he sat behind the skins for his father’s band, the Country Gentlemen. Mr. Hagstrom is native to Folkestone, England.

As Meredith Ochs of NPR’s All Songs Considered says, “Go see a Woggles show. It will change your life.”