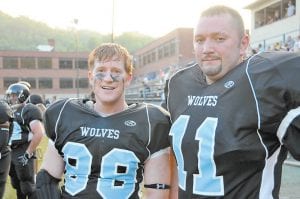 After the Knights drew first blood early in the game, the Wolves answered and tied the score at six. The Wolves kept the game close, entering halftime trailing by a touchdown, but Knoxville took over in the second half.

A quick pair of touchdowns put Knoxville ahead in the game for good and a late spark of energy from the Wolves, including a fourth quarter touchdown, proved to be too little as the Wolves fell, 22-12.

Penalties proved costly for the Wolves, as violations against Letcher County were called twice in the game for having too many players on the field. The team narrowly avoided the same flags several times throughout the game. Frustrations also caught up the Wolves at times, as unsportsmanlike conduct penalties were also assessed.

But, although their debut resulted in a loss, Wolves players and coaches expressed satisfaction for the team’s performance against the league champs.

“A goal of ours the whole time was to go out there and have a good game for the fans and keep it respectable,” said Wolves wide receiver Reid Mackin, of Whitesburg.

The team is made up of players largely from Letcher County, and some players from Perry County.

About 200 people came out to watch the Wolves’ debut, which was played at Fleming-Neon Elementary School’s football field.

The Wolves are part of the Alliance Football League, a 59-team semi-professional football league which plays games throughout the summer months. The team plays in the league’s Southeastern Region of the Appalachian Division. The Wolves home games will be played at Fleming-Neon’s field.

The next Wolves home game is June 12 at 7 p.m., against the Barbourville Bandits.