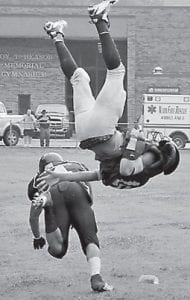 Wolves’ defensive back Justin Wallace went airborne for this interception during Letcher County’s win over Barbourville, the team’s first.

After battling not only the visiting Barbourville Bandits, but also Mother Nature herself, the Letcher County Wolves now have one in the win column, defeating Barbourville 24-12 Saturday evening.

The Wolves scored early in the game and held a two-touchdown lead entering the second half. Barbourville finally put numbers on the board in the third quarter before Letcher County scored again to lead 18-8.

The Bandits refused to go quietly into the night, however.

A touchdown late in the third quarter brought Barbourville within striking distance of the Wolves, 18-14.

Heavy rainstorms saturated the field and soaked anything not under an umbrella, making for treacherous playing conditions and forcing teams to play a running game and all but abandon the passing game. Centers for both teams struggled to hold onto and snap the ball, forcing quarterbacks to rush for yardage.

The Wolves struggled in the fourth quarter, fumbling the ball and giving Barbourville one more chance to take the lead late in the game. The elements caught up with the Bandits as well and Letcher County would retook possession of the ball on a Barbourville fumble and eventually scored some insurance points to take the 24-14 win.

The Wolves rode a wave of confi dence into Saturday’s game after being defeated by two-time defending Alliance Football League champions Knoxville last week. About 150 fans came out to see Saturday’s rain-soaked game against Barbourville.

The Wolves will travel north on U.S. 23 next Saturday to face the Pike County Crusaders at Bob Amos Park in Pikeville.